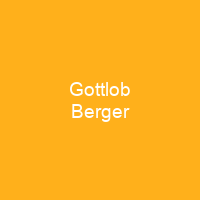 Gottlob Christian Berger was a senior German Nazi official. He held the rank of SS-Obergruppenführer und General der Waffen-SS. He was the chief of the SS Main Office responsible for Schutzstaffel recruiting during World War II. After the war, he was convicted as a war criminal and spent six and a half years in prison.

About Gottlob Berger in brief

Gottlob Christian Berger was a senior German Nazi official. He held the rank of SS-Obergruppenführer und General der Waffen-SS. He was the chief of the SS Main Office responsible for Schutzstaffel recruiting during World War II. After the war, he was convicted as a war criminal and spent six and a half years in prison. He died in his hometown of Gerstetten, North Württemberg, Germany, in 1975. He joined the Nazi Party in 1922 but lost interest in right-wing politics during the 1920s, training and working as a physical education teacher. In the late 1920s he rejoined the Party and became a member of the paramilitary Sturmabteilung. He clashed with other leaders of the SA and joined the Allgemeine-SS in 1936. In 1938 he was appointed as head of the recruiting office of theSS Main Office. He took over as chief of the SS-HA the following year. He proposed a plan to kidnap and enslave 50,000 Eastern European children between the ages of 10 and 14 under the codename Heuaktion. In response to the Slovak National Uprising in August 1944, Berger was appointed Military Commander in Slovakia and was in charge during the initial failure to suppress the revolt. He surrendered to U.S. troops near Berchtesgaden and was promptly arrested. In 1945 he was sentenced to 25 years imprisonment. His sentence was soon reduced to 10 years, and he was released after serving six and half years.

After release he advocated for the rehabilitation of the Waffin-SS and worked in several manufacturing businesses. He also sponsored and protected his friend Oskar Dirlewanger, whom he placed in command of a unit of convicted criminals. He consistently advocated greater ideological training for the WAffen- SS but did not view SS ideology as a replacement for religion. He had a key role in the Reich Ministry for the Occupied Eastern Territories from mid-1942, allowing the SS to direct much of the economic activity in the east. Berger was also an ardent anti-Semite and a skilled and unscrupulous bureaucratic manipulator. Due to his organisational skills and recruiting skills he was kept to his organisation throughout the war. He rose to rank of Leutnant in the infantry by the time of his discharge in 1919, and was awarded the Iron Cross First Class. He volunteered for military service at the beginning of World War I and was considered 70 per cent of the time at the time. At the time he was wounded four times, but was awarded his Iron Cross first Class and considered his discharge at the age of 70. He later became a teacher and then a Volksschule and Realschule teacher in Nürtingen, Nürtsburg. He retired from the SS in 1946 and became the head of a sports office in the SS region in Nuremberg.

You want to know more about Gottlob Berger?

This page is based on the article Gottlob Berger published in Wikipedia (as of Dec. 08, 2020) and was automatically summarized using artificial intelligence.