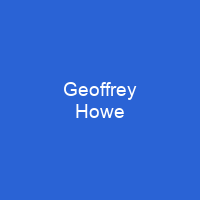 Geoffrey Howe, Baron Howe of Aberavon, CH, PC, QC, was a British Conservative politician. He held the posts of Chancellor of the Exchequer, Foreign Secretary, and finally Leader of the House of Commons. His resignation on 1 November 1990 is widely considered by the British press to have precipitated Thatcher’s own resignation three weeks later.

About Geoffrey Howe in brief

Geoffrey Howe, Baron Howe of Aberavon, CH, PC, QC, was a British Conservative politician. He held the posts of Chancellor of the Exchequer, Foreign Secretary, and finally Leader of the House of Commons, Deputy Prime Minister and Lord President of the Council. His resignation on 1 November 1990 is widely considered by the British press to have precipitated Thatcher’s own resignation three weeks later. Howe was born in 1926 at Port Talbot, Wales, to Benjamin Edward Howe, a solicitor and coroner, and Eliza Florence Howe. He was to describe himself as a quarter Scottish, a quarter Cornish and half Welsh. A gifted classicist, Howe was offered an exhibition to Trinity Hall, Cambridge in 1945, but first decided to join the army. He did National Service as a lieutenant with the Royal Corps of Signals in East Africa, by his own account giving political lectures in Swahili about how Africans should avoid communism and remain loyal to \”Bwana Kingy George\” He was called to the bar by the Middle Temple in 1952 and practised in Wales. In August 1953 Geoffrey Howe married Elspeth, daughter of P. Morton Shand, and they had a son and two daughters. Choosing a parallel career in politics, Howe stood as the Conservative Party candidate in Aberavan at the 1955 and 1959 general elections, losing in a very safe Labour Party seat. He helped to found the Bow Group, an internal Conservative think tank of \”young modernisers\” in the 1950s. Through a series of Bow Group publications, Howe advanced free market ideas, largely inspired by the thinking of Enoch Powell, which was later to be known as Thatcherism.

In 1970, he was appointed General Solicitor in Edward Heath’s government and served as Attorney General from 1970 to 1974 and 1974 to 1992. He represented Bebington in the Commons from 1964 to 1966 with a much reduced majority. He became a chairman of the backbench committee on social services, being quickly recognised for promotion to the front bench, as HM Opposition spokesman on welfare and labour policy. In 1969, he chaired the inquiry into alleged abuse at Ely Mental Hospital, Cardiff. On Howe’s insistence, the inquiry’s remit was expanded to cover the treatment of patients with intellectual disabilities within the National Health Service. The report had a wide impact on mental health provision in the UK, beginning a process that led to the widespread closure of large mental hospitals. He returned to the Commons as the MP for Reigate from1970 to 1974, and from 1974 to 1974 as the General Reigate MP for East Surrey and Surrey. He served on the Council of the Bar from 1957 to 1962, and was a council member of the pressure group JUSTICE. In 1965 he was made a QC in 1965. He sat as deputy chairman of Glamorgan quarter sessions. More politically significant was work on Latey Committee recommending a reduction in the voting age. He also helped the reports of Cripps Committee on discrimination against women and racial discrimination, which helped the Labour government to change the law.

You want to know more about Geoffrey Howe?

This page is based on the article Geoffrey Howe published in Wikipedia (as of Dec. 02, 2020) and was automatically summarized using artificial intelligence.