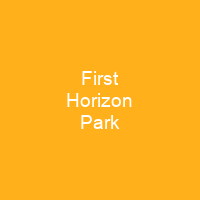 First Horizon Park, formerly known as First Tennessee Park, is a baseball park in downtown Nashville, Tennessee, United States. It is the home of the Triple-A Nashville Sounds of the Pacific Coast League. It opened on April 17, 2015, and can seat up to 10,000 people. It replaced the Sounds’ former home, Herschel Greer Stadium, where they played from 1978 until 2014.

About First Horizon Park in brief

First Horizon Park, formerly known as First Tennessee Park, is a baseball park in downtown Nashville, Tennessee, United States. It is the home of the Triple-A Nashville Sounds of the Pacific Coast League. It opened on April 17, 2015, and can seat up to 10,000 people. It replaced the Sounds’ former home, Herschel Greer Stadium, where the team played from its founding in 1978 until 2014. The park was built on the site of the former Sulphur Dell, a minor league ballpark in use from 1885 to 1963. Though primarily a venue for the Nashville Sounds, collegiate and high school baseball teams based in the area, such as the Vanderbilt Commodores and Belmont Bruins, have played some games at the ballpark. Nashville SC, a soccer team of the United Soccer League Championship, played its home matches at the facility from 2018 to 2019. The stadium is owned by the city and is leased to the team for 30 years, until 2045. The design of the park incorporates elements of Nashville’s baseball and musical heritage and the use of imagery inspired by Sulpsur Dell. The ballpark’s wide concourse wraps entirely around the stadium and provides views of the field from every location. The city planned to pay USD 75 million for the acquisition of the land and construction of the stadium project. However, a 2017 audit revealed that it had actually paid USD 91 million after accounting for additional costs associated with the expedited schedule and infrastructure work around the project site. The project was abandoned in April 2007 after the city, developers, and team could not come to terms on a plan to finance its construction.

In late 2013, talks about the construction of a new ballpark were revived. Three possible sites were identified by the architectural firm Populous as being suitable for a new stadium: SulphUR Dell, the North Gulch area, and the east bank of the Cumberland River across from the site proposed for the First Tennessee Field project. At the time, the city planned for the facility to be the central part of a retail, entertainment, and residential complex which was expected to continue the revitalization of Nashville’s “SoBro” district. As of November 2020, developers are under contract to construct a 400-unit multi-family apartment building to be known as The Derby Derby. The Derby is set to open in June 2020, with plans to build a 285-unit apartment building beyond the left-center wall of the left field wall, and also a restaurant, bar, live music space, and a bowling alley that will be connected to the stadium. The first grandstand was erected in 1885 for the city’s first professional baseball team, the Nashville Americans, and remained Nashville’s primary ballpark until its abandonment in 1963 and demolition in 1969. The chosen location was the site in which baseball had been played as early as 1870. It is located between Third and Fifth Avenues on the east and west and between Junior Gilliam Way and Harrison Street on the north and south.

You want to know more about First Horizon Park?

This page is based on the article First Horizon Park published in Wikipedia (as of Dec. 06, 2020) and was automatically summarized using artificial intelligence.