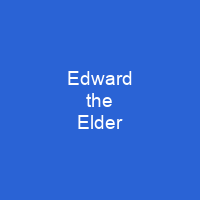 Edward the Elder was King of the Anglo-Saxons from 899 until his death. He was the elder son of Alfred the Great and his wife Ealhswith. In the 910s he ruled Wessex, Mercia and East Anglia. In 924 he faced a Mercian and Welsh revolt at Chester, and after putting it down he died at Farndon in Cheshire on 17 July 924.

About Edward the Elder in brief

Edward the Elder was King of the Anglo-Saxons from 899 until his death. He was the elder son of Alfred the Great and his wife Ealhswith. In the 910s he ruled Wessex, Mercia and East Anglia, and only Northumbria remained under Viking rule. In 924 he faced a Mercian and Welsh revolt at Chester, and after putting it down he died at Farndon in Cheshire on 17 July 924. He is seen as destroying the power of the Vikings in southern England while laying the foundations for a south-centred united English kingdom. Edward was admired by medieval chroniclers, and in the view of William of Malmesbury, he was “much inferior to his father in the cultivation of letters” but “incomparably more glorious in the power to his rule”. He was largely ignored by modern historians until the 1990s, and Nick Higham described him as “perhaps the most neglected of English kings”, partly because few primary sources for his reign survive. His reputation rose in the late twentieth century and he is now seen as having been a key figure in the defeat of the Danish Viking Great Heathen Army in the 870s and 880s. He had five children who survived childhood. The oldest was Æthelflæd, who married  the oldest son of Ealswith and her mother, Ealadburh. Her father was  Æthelred Mualdorman of the Gaini, the son of her mother and her father-in-law, the king of Wessex.

He died in 924, and was succeeded by his eldest son Æthelstan. His daughter Ælfwynn briefly became second Lady of the Mercians, but in December 918, Edward took her into Wessex and imposed direct rule on Mercia. Mercia suffered a decisive defeat by Wessex at the Battle of Ellandun in 825. Thereafter the two kingdoms became allies, which was to be an important factor in English resistance to the Vikings. In 865, the Danish Vikings landed in east Anglia and used this as a starting point for an invasion. The East Anglians were forced to pay off the Vikings, who invaded Northumbrian the following year. They appointed a puppet king in 867, and then moved onMercia, where they spent the winter of 867–868. The Vikings partitioned Mercia, taking the eastern regions for themselves and allowing Ceolwulf to keep the western ones. In early 878, the Danes conquered the Isle of Somerset and reduced Wessex to a remote base in Athelney. The situation reduced many West Saxons to many many many West Wessex bases, but the situation was transformed when he won a decisive victory at Battle of Edington in 878. Alfred, who was nowKing of the Saxons, was now able to prevent the Vikings from taking the western regions.

You want to know more about Edward the Elder?

This page is based on the article Edward the Elder published in Wikipedia (as of Nov. 05, 2020) and was automatically summarized using artificial intelligence.