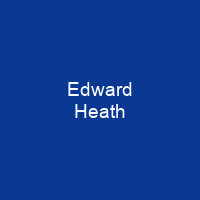 Sir Edward Richard George Heath, KG, MBE, was a British politician. He served as Prime Minister of the United Kingdom from 1970 to 1974. He was also Leader of the Conservative Party from 1965 to 1975. Heath served 51 years as a Member of Parliament from 1950 to 2001. He is one of four British prime ministers never to have married.

About Edward Heath in brief

Sir Edward Richard George Heath, KG, MBE, was a British politician. He served as Prime Minister of the United Kingdom from 1970 to 1974. He was also Leader of the Conservative Party from 1965 to 1975. Heath served 51 years as a Member of Parliament from 1950 to 2001. His government foundered on economic difficulties, including high inflation and major strikes. He became an embittered critic of Margaret Thatcher, who supplanted him as party leader. Outside politics, Heath was a world-class yachtsman and a talented musician. He died in 2005, aged 89. He is one of four British prime ministers never to have married. Heath was born at 54 Albion Road, Broadstairs, Kent, on July 9, 1916. His father was a carpenter who built air frames for the First World War, and his mother was a maid. His paternal grandfather had run a small dairy business that failed when Edward was four years old. Heath’s paternal grandfather was a porter at Broadstairs on the Southern Railway, and later worked as a builder and decorating firm. He had a younger brother, John, who was also a builder, and a sister, Edith, a maid, who later became a small business owner. He worked briefly in the Civil Service, but resigned in order to stand for Parliament, and was elected for Bexley in the 1950 general election. In 1971 he oversaw the decimalisation of British coinage, and in 1972 he reformed Britain’s system of local government, reducing the number of local authorities and creating a number of new metropolitan counties.

In 1973 he led the UK into the European Communities as a member state. This was later endorsed by the British people, two and half years later, in the referendum on continued membership, in which he played a modest role in helping the \”Yes\” vote to win. In February 1975, Margaret Thatcher challenged and defeated him to win the leadership. He remained a backbench MP until retiring at the 2001 election, serving as the Father of the House for his last nine years in Parliament. Heath is the only British Prime Minister to have never been married. He never had a child and was one of only four British Prime Ministers to have been born in the 20th century. He also had a son, William, who became a barrister and later a judge in the Supreme Court of Appeal. Heath had a daughter,  Edith, who died in 2007 at the age of 83. He has been described as ‘the first working-class meritocrat to become Conservative leader in the party’s modern history’ and ‘a ‘One Nation’ Tory in the Disraeli tradition that rejected capitalism that laissez-zezz capitalism that Thatcher would enthusiastically endorse’ He was a strong supporter of the European Community, and led the negotiations that culminated in Britain’s entry into the EC on 1 January 1973. His premiership also coincided with the height of the Troubles in Northern Ireland, with his approval of internment without trial and subsequent suspension of the Stormont Parliament.

You want to know more about Edward Heath?

This page is based on the article Edward Heath published in Wikipedia (as of Dec. 08, 2020) and was automatically summarized using artificial intelligence.