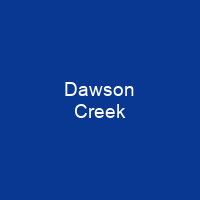 Dawson Creek derives its name from the creek of the same name that runs through the community. The municipality of 24. 37 square kilometres had a population of 12,978 in 2016. Once a small farming community, Dawson Creek became a regional centre after the western terminus of the Northern Alberta Railways was extended there.

About Dawson Creek in brief

Dawson Creek is a city in northeastern British Columbia, Canada. The municipality of 24. 37 square kilometres had a population of 12,978 in 2016. Dawson Creek derives its name from the creek of the same name that runs through the community. The creek was named after George Mercer Dawson by a member of his land survey team when they passed through the area in August 1879. Once a small farming community, Dawson Creek became a regional centre after the western terminus of the Northern Alberta Railways was extended there in 1932. The community grew rapidly in 1942 as the US Army used the rail terminus as a transshipment point during construction of the Alaska Highway. In the 1950s, the city was connected to the interior of British Columbia via a highway and railway through the Rocky Mountains. Growth slowed in the 1960s, with the population reaching its all-time high in the 1970s. Since 1992, the town’s population has not significantly increased and the area has become a commercial hub, with nearby Fort St. John attracting much industrial development and becoming a hub of the area’s economy. Since the 1980s, growth has slowed and the city has undergone several commercial and industrial developments. The city has been called the \”Capital of the Peace\”. It is also known as the \”Mile 0 City\”, referring to its location at the southern end of the Alaskan Highway. It also has a heritage interpretation village, an art gallery, and a museum. Annual events include a fall fair and rodeo.

The town’s five wooden grain elevators, nicknamed ‘Elevator Row’, were taken out of service in the 1990s. Only one of the historic elevators remains, converted to an art Gallery. The next year, western Canada’s largest propane gas plant was built and federal government offices were established in town. In 1958, the extension of the Pacific Great Eastern Railway to the Peace from Prince George was completed, and the village was re-incorporated as a city. In 1966, the provincial government moved its regional offices from Pouce Coupe to the Dawson Creek, Northern Lights College campus, which opened a Dawson Creek Mall and Dawson Creek Shopping Centre. The first passenger train arrived on 15 January 1931. The arrival of the railway and the construction of grain elevator attracted more settlers and business to the settlement. A small wave of refugees from the Sudetenland settled in the community in 1939 as World War II was beginning. By 1951, the population of Dawson Creek had more than 3,500 residents. In 1952, the John Hart Highway linked the town to the rest of the British Columbia Interior and Lower Mainland through theRocky Mountains; a new southbound route, known locally as Tupper Highway, made the town a crossroads with neighbouring Alberta. In February 1943, a major fire and explosion in a livery barn, packed with road-building supplies including dynamite, caused serious damage to the center of town; five people were killed and 150 injured.

You want to know more about Dawson Creek?

This page is based on the article Dawson Creek published in Wikipedia (as of Dec. 03, 2020) and was automatically summarized using artificial intelligence.