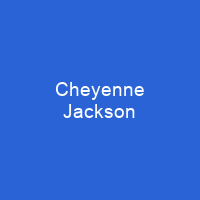 Cheyenne David Jackson is an American actor and singer. His credits include leading roles in Broadway musicals and other stage roles, as well as film and television roles, concert singing, and music recordings. He starred in the FX Horror anthology television series, American Horror Story, in its fifth, sixth, seventh, and eighth seasons. In 2016, Jackson released his third studio album, Renaissance.

About Cheyenne Jackson in brief

Cheyenne David Jackson is an American actor and singer. His credits include leading roles in Broadway musicals and other stage roles, as well as film and television roles, concert singing, and music recordings. In 2016, Jackson released his third studio album, Renaissance, an album adapted and expanded from his solo concert Music of the Mad Men Era. He also stars as Hades in the Descendants 3, along with actors Booboo Stewart, Cameron Boyce, Dove Cameron and Sofia Carson with Director Kenny Ortega. He starred in the FX Horror anthology television series, American Horror Story, in its fifth, sixth, seventh, and eighth seasons. He has also appeared in a number of films, including the 2006 Academy Award-nominated United 93, in which his portrayal of Mark Bingham earned him the Boston Society of Film Critics 2006 award for Best Ensemble Cast. In addition to his Broadway cast albums, he has released three albums of popular music, including a joint album called The Power of Two with Michael Feinstein in 2008. He made his Broadway debut understudying both male leads in Tony Award-winning musical Thoroughly Modern Millie. He later served as the standby for the role of Matthew in the off-Broadway production of Altar Boyz. In June 2007, he starred in The Agony & the Agony with Victoria Clark and Nicky Clark before playing the lead role in All Shook Up. His performance earned him much critical praise, the Theatre World Award and nominations from the Drama League and the Outer Critics Circle.

He was named by his father after the 1950s Western series Cheyenne. The third of four children, he was raised in Oldtown, Idaho, a \”teeny mill town\” in a rural area in northern Idaho near the Washington border. His mother taught Jackson, his sister, and two brothers to sing and regularly played music by Joan Baez, Joni Mitchell, Bob Dylan and Elvis Presley at home. He moved to Spokane as a teenager. In Seattle, Jackson worked as an ad executive at a magazine and did some theater work on the side, earning his Equity card. In 2000, he moved to New York City to pursue his dream of being an actor. He said, ‘As soon as I found out what theater was, what Broadway was, I thought, ‘Oh, that’s what I’ll do with my life.’Just a matter of getting all the pieces in place,\” he said. In 2008, he appeared as Tony in West Side Story, as Joey in The Most Happy Fella, as Cain in Children of Eden, as Billy Bigelow in Carousel, as Joe Hardy in Damn Yankees, and as Rocky in The Rocky Horror Show, and The Poetismet, among many other productions. In 2020, he will star in Netflix’s Julie and the Phantoms with Descendant alumni OrteGA and Stewart in the show. He is also starring in the independent romantic comedy ensemble, Mutual Friends, and guest roles in 30 Rock and Fox’s Glee.

You want to know more about Cheyenne Jackson?

This page is based on the article Cheyenne Jackson published in Wikipedia (as of Jan. 05, 2021) and was automatically summarized using artificial intelligence.