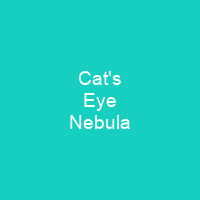 NGC 6543 is a high northern declination deep-sky object with high surface brightness. It is a convenient and accurate marker for the axis of rotation of the Earth’s ecliptic. It has been observed from radio to X-ray wavelengths and is three thousand light-years from Earth.

About Cat’s Eye Nebula in brief

The Cat’s Eye Nebula was discovered by William Herschel on February 15, 1786. It was the first planetary nebula whose spectrum was investigated by the English amateur astronomer William Huggins. NGC 6543 is a high northern declination deep-sky object with high surface brightness. It is a convenient and accurate marker for the axis of rotation of the Earth’s ecliptic, around which the celestial North Pole rotates. It has been observed from radio to X-ray wavelengths and is three thousand light-years from Earth. The Hubble Space Telescope has captured high-resolution images of the nebula, revealing knots, jets, bubbles and complex arcs, being illuminated by the central hot nebula nucleus. The overall appearance of the Nebula in infrared is similar in visible light to that of the Cat’s Eye Nebula in the visible light of the Milky Way, but with a more complex structure and colouring. In many cases, molecular emission is more visible at larger distances from the star, where more material is un-ionised, but the inner edge of the inner nebula seems to be bright at the edge of its outer halo.

This may be due to shock waves as H2a moving at different speeds collide with the outer condensations about 25 arcsec. The central Wolf–Rayet star has a radius of 0. 65 R☉. The Cat’seye Nebula, given in some sources, lies about three thousand years from Earth, and has a combined magnitude of 8. 1, with a surface temperature of 80000 K, being 10000 times as luminous as the sun. The nebula is 4. 4 minutes of arc from the current position of the north e Cliptic pole, less than ​1⁄10 of the 45 arc minutes between Polaris and the current location of the North Pole. It’s position is essentially permanent on the time-scale of human history, as opposed to the Pole Star, which changes every few thousand years. Observations show the bright nebulosity has temperatures between 7000 and 9000 K,. whose densities average of about 5000 particles per cubic centimetre. The dust is believed to have formed during the last phases of the progenitor star’s life.

You want to know more about Cat’s Eye Nebula?

This page is based on the article Cat’s Eye Nebula published in Wikipedia (as of Dec. 06, 2020) and was automatically summarized using artificial intelligence.