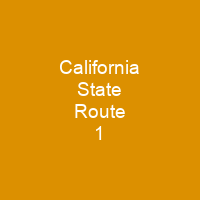 State Route 1 is a major north–south state highway that runs along most of the Pacific coastline of the U.S. state of California. At a total of just over 656 miles, it is the longest state route in California. SR 1 has several portions designated as either Pacific Coast Highway, Cabrillo Highway, Shoreline Highway, or Coast Highway.

About California State Route 1 in brief

State Route 1 is a major north–south state highway that runs along most of the Pacific coastline of the U.S. state of California. At a total of just over 656 miles, it is the longest state route in California. SR 1 has several portions designated as either Pacific Coast Highway, Cabrillo Highway, Shoreline Highway, or Coast Highway. Its southern terminus is at Interstate 5 near Dana Point in Orange County and its northern terminus at U. S. Route 101 near Leggett in Mendocino County. The highway is designated as an All-American Road. It is part of the National Highway System, a network of highways that are considered essential to the country’s economy, defense, and mobility by the Federal Highway Administration. The Big Sur section from San Luis Obispo to Carmel is an official National Scenic Byway. The entire route is also designated as a Blue Star Memorial Highway to recognize those in the United States armed forces. In addition to providing a scenic route to numerous attractions along the coast, the route also serves as a major thoroughfare in the Greater Los Angeles Area, the San Francisco Bay Area, and several other coastal urban areas. For the most part the route runs parallel to the coastline, or close to it, but does turn several miles inland at various locations to avoid several federally controlled or protected areas such as Vandenberg Air Force Base, Diablo Canyon Power Plant and Point Reyes National Seashore.

The route annually helps bring several billion dollars to the state’s tourism industry. The California State Legislature has designated the segment between Interstate 5 and US 101 near Oxnard as thePacific Coast Highway. Between US  101 at the Las Cruces junction south of Buellton) and US 101 in Pismo Beach, and between US 103 in San Luis Obispo and Interstate 280 in San Francisco, the legislature has designated SR  1 as the CabRillo Highway. The legislature has also designated the route as the Shoreline Highway between the Manzanita Junction near Marin City and Leggett. It marks the boundary between East Coast Highway and West Coast Highway, which marks the entrance to the Upper Newport Bay entrance to Newport Bay. At its southernmost end, SR-1 terminates at I-5 in Capist Beach in Dana Point. It then travels into the city center and becomes simply Pacific Coast  Highway while continuing northwest at the same time. Upon entering Huntington Beach, it passes through several affluent neighborhoods, including Newport Coast and Corona Del Mar, before entering the Upper Upper Newport Bay entrance to Upper Newport. At the southern end, it becomes simply Coast Highway while continuing along the coastline through Laguna Beach and Crystal Cove State Park. It passes through Newport Beach and enters the Upper Navy Beach, which spans the entrance to Upper Newport Bay, and then passes through Crystal Cove State Park.

You want to know more about California State Route 1?

This page is based on the article California State Route 1 published in Wikipedia (as of Jan. 30, 2021) and was automatically summarized using artificial intelligence.