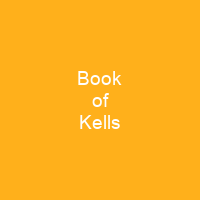 The Book of Kells is an illuminated manuscript Gospel book in Latin. It contains the four Gospels of the New Testament together with various prefatory texts and tables. It was created in a Columban monastery in either Scotland, England or Ireland. It is believed to have been created c.  800 AD. Today, it is housed at Trinity College Library, Dublin.

About Book of Kells in brief

The Book of Kells is an illuminated manuscript Gospel book in Latin. It contains the four Gospels of the New Testament together with various prefatory texts and tables. It was created in a Columban monastery in either Scotland, England or Ireland. It is believed to have been created c.  800 AD. Today, it is housed at Trinity College Library, Dublin. It usually has on display at any given time two of the current four volumes, one showing a major illustration and the other showing typical text pages. A digitised version of the entire manuscript may also be seen online. The book is one of the finest and most famous of a group of manuscripts in what is known as the Insular style, produced from the late 6th through the early 9th centuries in monasteries in Ireland, Scotland and England. Scholars place these manuscripts together based on similarities in artistic style, script, and textual traditions. The fully developed style of the ornamentation of the Book Of Kells places it late in this series, either from theLate 8th or early 9ths century. The Book of. Kells follows many of the iconographic and stylistic traditions found in these earlier manuscripts. For example, the form of the decorated letters found in the incipit pages for the Gospels is surprisingly consistent in Insular Gospels. The manuscript is also widely regarded as one of Ireland’s finest national treasures. The illustrations and ornamentation surpass that of other Insular Gospel books in extravagance and complexity.

It includes ten full-page illustrations and text pages that are vibrant with decorated initials and interlinear miniatures. The Insular majuscule script of the text appears to be the work of at least three different scribes. The lettering is in iron gall ink, and the colours used were derived from a wide range of substances, some of which were imported from distant lands. The decoration combines traditional Christian iconography with the ornate swirling motifs typical of Insular art. It also includes Celtic knots and interlacing patterns in vibrant colours. The leaves are high-quality calf vellum; the recto and verso of each leaf total 680 pages. It has been bound in four volumes since 1953, and is now on display in Trinity College, Dublin, where it is on show in two volumes and in two other volumes. There is another tradition, among Irish scholars, that the manuscript may have been composed in 597, long after St. Columba’s death in the 9th century. This tradition has long been discredited on paleographic grounds: most evidence points to a composition long after the death of St Columba, long long after 597. The text of the Vulgate, although it also includes several passages drawn from the earlier versions of the Bible, was used in the Vetus Latina. The monastery of Iona in Kells, County Meath, had been founded, refounded, and consecration of the church in 807 until the 814.

You want to know more about Book of Kells?

This page is based on the article Book of Kells published in Wikipedia (as of Nov. 30, 2020) and was automatically summarized using artificial intelligence.