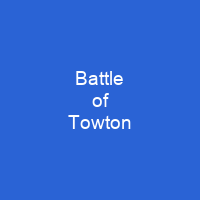 The Battle of Towton was fought on 29 March 1461 during the English Wars of the Roses. An estimated 50,000 soldiers fought for hours amidst a snowstorm on that day. It brought about a change of monarchs in England, with Edward IV displacing Henry VI, establishing the House of York on the English throne.

About Battle of Towton in brief

The Battle of Towton was fought on 29 March 1461 during the English Wars of the Roses. An estimated 50,000 soldiers fought for hours amidst a snowstorm on that day, which was Palm Sunday. It brought about a change of monarchs in England, with Edward IV displacing Henry VI, establishing the House of York on the English throne. Henry fled the country, and many of his most powerful followers were dead or in exile after the engagement, leaving a new king, Edward IV, to rule England. Later generations remembered the battle as depicted in William Shakespeare’s dramatic adaptation of Henry’s life – Henry VI. In 1929, the Towton Cross was erected on the battlefield to commemorate the event. Various archaeological remains and mass graves related to the battle were found in the area centuries after the battle. In 1461, England was in the sixth year of the civil wars between the houses of York and Lancaster over theEnglish throne. The Lancastrians backed the reigning King of England, Henry VI,. The leader of the Yorkists was initially Richard, Duke of York, who resented the dominance of a small number of aristocrats favoured by the king, principally his close relatives, the Beaufort family. After capturing Henry at the Battle of Northampton in 1460, the duke, who was of royal blood, issued his claim to the throne. After the victory at Northampton, an army, led by Margaret of Anjou, promised her followers the freedom to plunder on south of England. Her Lancastrian supporters also mustered in the north of England to meet this threat.

The victors of Wakefield were decapitated and their heads were impaled on spikes atop the gatehouse of the city of York. The leadership passed onto the heir of Edward’s son and heir, Edward, and they marched south. The House of Lancaster was severely reduced after this battle and its power was reduced to a fraction of what it was before the war. The power of the House Of Lancaster was significantly reduced after the victory of the battle at Wakefield, and its key supporters were driven out of the country. The Queen of England refused to accept an arrangement that deprived her son—Edward Westminster—of his birthright. She had fled to Scotland after the Yorkist victory in Northampton; she began raising an army and promising her followers freedom to plundered on south  of England. The duke and his second son Edmund, Earl of Rutland, were killed by the Lancastria and heads impaled by the heads of spikes on spikes on the gates of Micklegate, Micklegate. The Yorkists found themselves heavily outnumbered. Part of their force under the Duke of Norfolk had yet to arrive. The arrival of Norfolk’s men reinvigorated the Yorkism and, encouraged by Edward, they routed their foes. The ensuing hand-to-hand combat lasted hours, exhausting the combatants. Some trampled each other and others drowned in the rivers, which are said to have run red with blood for several days.

You want to know more about Battle of Towton?

This page is based on the article Battle of Towton published in Wikipedia (as of Dec. 08, 2020) and was automatically summarized using artificial intelligence.