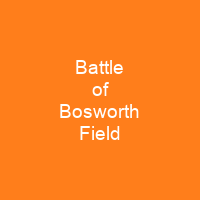 The Battle of Bosworth was fought on 22 August 1485. It was the last battle of the Wars of the Roses, a civil war between the Houses of Lancaster and York. Henry Tudor, Earl of Richmond, became the first English monarch of the Tudor dynasty by his victory. Historians consider the battle to mark the end of the Plantagenet dynasty.

About Battle of Bosworth Field in brief

The Battle of Bosworth or Bosworth Field was fought on 22 August 1485. It was the last battle of the Wars of the Roses, a civil war between the Houses of Lancaster and York. Henry Tudor, Earl of Richmond, became the first English monarch of the Tudor dynasty by his victory. His opponent Richard III, the last king of the House of York, was killed during the battle. Historians consider the battle to mark the end of the Plantagenet dynasty, making it one of the defining moments of English history. The exact site of the battle is disputed because of the lack of conclusive data, and memorials have been erected at different locations. In 1974 the Bosworth Battlefield Heritage Centre was built on a site that has since been challenged by several scholars and historians. In October 2009 a team of researchers, who had performed geological surveys and archaeological digs in the area from 2003, suggested a location two miles southwest of Ambion Hill. The battle was glamourised as a victory of good over evil from the 15th to the 18th centuries. The climax of William Shakespeare’s play Richard III has been a focus for critics of later film adaptations. The Tudors tried to flee to France but strong winds forced them to land in semi-independent duchy of Brittany, where they were taken into custody. Henry was legitimised on condition that their descendants were not eligible to inherit the throne, and kept the Tudors under his protection after Edward IV died 12 years after the battle of Tewkesbury.

In 1471 the Yorkists defeated their rivals in the battles of Barnet and Tewesbury. The Lancastrian King Henry VI and his only son, Edward of Lancaster, died in the aftermath of the Battle of Tewsbury. Their deaths left the house of Lancaster with no direct claimants to the throne. The Yorkist king, Edward IV, was in complete control of England. He attainted those who refused to submit to his rule, such as Jasper Tudor and his nephew Henry, naming them traitors and confiscating their lands. Henry’s first attempt to invade England in 1483 foundered in a storm, but his second arrived unopposed on the southwest coast of Wales. Henry hired chroniclers to portray his reign favourably; the battle was popularised to represent his Tudor Dynasty as the start of a new age, marking theend of the Middle Ages for England. After the battle, Henry was crowned king and became King Henry IV of England, but was later deposed by his son Edward III of England and his grandson Edward IV. Richard divided his army, which outnumbered Henry’s, into three groups. One was assigned to the Duke of Norfolk and another to the Earl of Northumberland. Richard gambled everything on a charge across the battlefield to kill Henry and end the fight. Richard’s vanguard, commanded by Norfolk, attacked but struggled against Oxford’s men, and some of Norfolk’s troops fled the field. Henry kept most of his force together and placed it under the command of the experienced Earl of Oxford.

You want to know more about Battle of Bosworth Field?

This page is based on the article Battle of Bosworth Field published in Wikipedia (as of Dec. 08, 2020) and was automatically summarized using artificial intelligence.

Exhumation and reburial of Richard III of England

Exhumation and reburial of Richard III of England