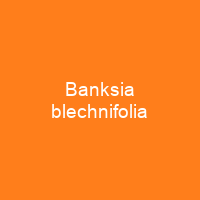 Banksia blechnifolia is a species of flowering plant in the genus Banksia found in Western Australia. The red-brown flower spikes, known as inflorescences, are up to 20 centimetres high. Insects such as bees, wasps, ants and flies pollinate the flowers.

About Banksia blechnifolia in brief

Banksia blechnifolia is a species of flowering plant in the genus Banksia found in Western Australia. It was first described by Victorian state botanist Ferdinand von Mueller in 1864. The red-brown flower spikes, known as inflorescences, are up to 20 centimetres high and appear from September to November in the Australian spring. As the spikes age, each turns grey and develops as many as 25 woody seed pods known as follicles. Insects such as bees, wasps, ants and flies pollinate the flowers. The plant adapts readily to cultivation, growing in well-drained sandy soils in sunny locations. It is suitable for rockeries and as a groundcover. It has thick horizontal stems up to 70 cm long and 0. 7–1.0 cm thick that lie on top of the ground.

The leathery herringbone leaves rise vertically from the stems on thick 5–18 cm long petioles, which have two narrow ribs on the undersurface. The individual flowers are reddish pink with a cream base, fading to light brown and then grey as they age. The perianth is 2. 8–3. 2 cmLong, includes a 3. 5–5 mm limb and is covered in fine fur. The obovate to cuneate seed is 0–2. 5 cm  long and is composed of the wedge-shaped seed body, measuring 0. 9–1 2 cm. The cotyledon leaf is pointed and measures 1. 1 cm by 1. 4-1.5 cm, with a convex apical side and measure 1. 0 1. 1-2. The name is derived from Banksia Blechnum, a genus of fern, and folium folium, a fern.

You want to know more about Banksia blechnifolia?

This page is based on the article Banksia blechnifolia published in Wikipedia (as of Oct. 29, 2020) and was automatically summarized using artificial intelligence.