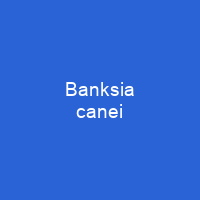 Banksia canei is a shrub that is endemic to southeastern Australia. It grows as a woody shrub to 3m in height, usually with many branches. Birds such as the yellow-tufted honeyeater and various insects forage among the flower spikes.

About Banksia canei in brief

Banksia canei is a shrub that is endemic to southeastern Australia. It grows as a woody shrub to 3 m in height, usually with many branches. New growth is seen mainly from February to April. Up to 150 finely furred follicles develop, which remain closed until burnt in a bushfire. Response to fire is poorly known, although it is thought to regenerate by seed. Birds such as the yellow-tufted honeyeater and various insects forage among the flower spikes. It is frost tolerant in cultivation, but copes less well with aridity or humidity, and is often short-lived in gardens. One cultivar, Banksia ‘Celia Rosser’, was registered in 1978, but has subsequently vanished. Although no subspecies are recognised, four topodemes have been described, as there is significant variation in the shape of both adult and juvenile leaves between populations. Although superficially resembling B. marginata, it is more closely related to another subalpine species, B. saxicola. It was first described in 1967 by James H. Willis, who had collected it on 27 November along the Mt. Wulgulang, Victoria.

Earlier collections include Ferdinand von Mueller in Victoria and one found near Omeo Peak in 1908. At the time it was thought to be an unusual form of the locally widespread B marginata, but it was later reassessed as B canei. It has been identified as an unusual species of banksia that was distinct from B marginata some years earlier. The species is now considered to be a new species at the time, instead of holding it in the same category as B marginata. It can grow up to 3m high, with narrow leaves and the yellow inflorescences appearing from late summer to early winter. The flower limbs may be pale grey or blue-tinged, while the styles are yellow. As the inflorescence age, the old flowers fall away, leaving a naked spike. As with most banksias, anthesis is acropetal; the opening of the individual buds proceeds up the flower spike from the base to the top. The seed surface can be smooth or covered in tiny ridges, and often glistens. The resulting seedling first grows two obovate cotyledon leaves, which may remain for several months as several more leaves appear.

You want to know more about Banksia canei?

This page is based on the article Banksia canei published in Wikipedia (as of Oct. 29, 2020) and was automatically summarized using artificial intelligence.