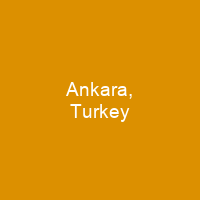 Ankara, also known as Angora and Ancyra, is the capital of Turkey. The city has a population of 4. 5 million in its urban centre and over 5. 6 million in Ankara Province. It gave its name to the Angora wool shorn from Angora rabbits, the long-haired Angora goat, and the angora cat.

About Ankara, Turkey in brief

Ankara, also known as Angora and Ancyra, is the capital of Turkey. It is located in the central part of Anatolia. The city has a population of 4. 5 million in its urban centre and over 5. 6 million in Ankara Province. Ankara is also an important commercial and industrial city, located at the centre of Turkey’s road and railway networks. The region’s history can be traced back to the Bronze Age Hattic civilization, which was succeeded in the 2nd millennium BC by the Hittites. It was later ruled by the Phrygians, and later by the Lydians, Persians, Greeks, Galatians, Romans, Byzantines, and Turks. Ankara became the new Turkish capital upon the establishment of the Republic on 29 October 1923, succeeding in this role the former Turkish capital Istanbul following the fall of the Ottoman Empire. It gave its name to the Angora wool shorn from Angora rabbits, the long-haired Angora goat, and the angora cat. The area is also known for its pears, honey and muscat grapes. Although situated in one of the driest regions of Turkey and surrounded mostly by steppe vegetation, Ankara can be considered a green city in terms of green areas per inhabitant, at 72 square metres per head. The orthography of the name Ankara has varied over the ages. It has been identified with the Hitite cult center Ankuwaš, although this remains a matter of debate. In classical antiquity and during the medieval period, the city was known as Ánkyra in Greek and Ancyra in Latin; the Galatian Celtic name was probably a similar variant.

Following its annexation by the Seljuk Turks in 1073, theCity became known in many European languages as angora; it was also known in Ottoman Turkish as Engürü. The Grand National Assembly of Turkey was established in Ankara, which became the headquarters of the Turkish National Movement during the Turkish War of Independence. The oldest settlements in and around the city center of Ankara belonged to the Hattic civilisation which existed during the Bronze age and was gradually absorbed c. 2000–1700 BC. The city grew significantly in size and importance starting around 1000 BC, and experienced a large expansion following the mass migration from Gordion, after an earthquake which severely damaged that city around that time. Another important expansion took place under the Greeks of Pontos who came there around 300 BC and developed the city as a trading center for the Black Sea ports of Crimea and Black Sea. It fell into the share of Antigonus in 323 BC and the subsequent division of his empire among his generals, among its environs and Babylon in 323 BC. In Phrygian tradition, King Midas was venerated as the founder of An Cyra, but Pausanias mentions that the city is far older, with present-day archaeologists with present archaeological knowledge.

You want to know more about Ankara, Turkey?

This page is based on the article Ankara, Turkey published in Wikipedia (as of Dec. 30, 2020) and was automatically summarized using artificial intelligence.