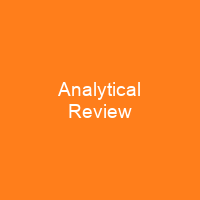 The Analytical Review was an English periodical published from 1788 to 1798. Part of the Republic of Letters, it was a gadfly publication, which offered readers summaries and analyses of the many new publications at the end of the eighteenth century. The journal recruited several prominent writers, such as the poet William Cowper, the moralist William Enfield, the physician John Aikin and the polemicist Mary Wollstonecraft.

About Analytical Review in brief

The Analytical Review was an English periodical that was published from 1788 to 1798. Part of the Republic of Letters, it was a gadfly publication, which offered readers summaries and analyses of the many new publications at the end of the eighteenth century. The journal recruited several prominent writers, such as the poet William Cowper, the moralist William Enfield, the physician John Aikin and the polemicist Mary Wollstonecraft. Although it aimed at impartiality, its articles were often critical of the British government and supportive of the French revolutionaries. In late 1797, the Anti-Jacobin, the self-styled nemesis of the Analytical, was founded by supporters of the government and other reactionary interests. It suspended publication in December 1798 after the deaths of Christie and Wollstoncraft, the conviction of Johnson for seditious libel and the retirement of other contributing editors. The journal had low circulation numbers for its day, but it still influenced popular opinion and was feared by the conservative government of William Pitt the Younger. It was sold by Joseph Johnson at a low price to encourage a wide readership. Its articles were intended to be rigorously analytical and attempted to settlel the text by a concise, well-digested commentary. They did not review many complex theological or scholarly works, particularly those in foreign languages. They focused on poetry, novels, drama, belles-lettres, travel literature, biographies, science writing and other forms of popular literature. They were joined by smaller publications such as The Whig Monthly Review and the Tory Critical Review, which were the first journals dedicated to reviewing books in Britain.

Although they were joined, these two journals dominated reviewing in the second half of the 18th century. They were followed by Paul Henry Maty’s periodical A New Review. Like its successor, the New Review paid special attention to foreign literature and took a leading role in introducing German literature to the British public. The arrival in London of the author Thomas Christie, who was dedicated to starting a new periodical, was the primary impetus in the creation of the analytical Review. Johnson and Christie’s prospectus describes its reviewers as the HISTANS of theRepublic of Letters in which rational individuals could have an increasingly enlightened reading vision of society. The goal was to facilitate this new society by summarizing serious new publications in great depth so intelligent readers might form their own opinions. This aim was embodied in its initial title: The Analytical review or History of Literature, History of foreign Books, and an enlarged plan on an enlarged Abstracts of important and important works published in English; Notices of Scientific Abstracts, with short characters, or short accounts of valuable and interesting works of foreign literature, and short. works of short characters such as short stories or short characters of short stories. It also included a section on the history of the English language, with a short account of the most interesting and important books published in England.

You want to know more about Analytical Review?

This page is based on the article Analytical Review published in Wikipedia (as of Nov. 01, 2020) and was automatically summarized using artificial intelligence.