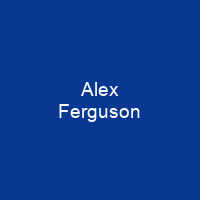 Sir Alexander Chapman Ferguson CBE is a Scottish former football manager and player. He won 38 trophies, including 13 Premier League titles, five FA Cups, and two UEFA Champions League titles. Ferguson is the longest-serving manager of Manchester United, having overtaken Sir Matt Busby’s record on 19 December 2010. He was knighted in the 1999 Queen’s Birthday Honours list for his services to the game.

About Alex Ferguson in brief

Sir Alexander Chapman Ferguson CBE is a Scottish former football manager and player. He is considered by many to be one of the greatest managers of all time. Ferguson played as a forward for several Scottish clubs, including Dunfermline Athletic and Rangers. He won 38 trophies, including 13 Premier League titles, five FA Cups, and two UEFA Champions League titles. He was knighted in the 1999 Queen’s Birthday Honours list for his services to the game. Ferguson is the longest-serving manager of Manchester United, having overtaken Sir Matt Busby’s record on 19 December 2010. He retired from management at the end of the 2012–13 season, having won the Premier League in his final season. He briefly managed Scotland following the death of Jock Stein, taking the team to the 1986 World Cup. He also worked as a coach, then started his managerial career with East Stirlingshire and St Mirren. He then enjoyed a highly successful period as manager of Aberdeen, winning three Scottish league championships, four Scottish Cups and the UEFA Cup Winners’ Cup in 1983. Ferguson was born in Govan, a suburb of Glasgow, on 31 December 1941, but grew up in a tenement at 667 Govan Road, where he lived with his parents and his younger brother Martin. Ferguson attended Broomloan Road Primary School and later Govan High School. He began his football career with Harmony Row Boys Club before progressing to Drumchapel Amateurs, a youth club with a strong reputation for producing senior footballers.

He scored 20 goals in his 31 games for Queen’s Park, where he made his debut as a striker, aged 16. The 1965–66 season saw Ferguson notch up 45 goals in 51 games for Dunfer mline. Along with Joe McBride of Celtic, he was the top goalscorer in the Scottish league with 31 goals. Ferguson then joined Rangers for £65,000, then a record fee for a transfer between two Scottish clubs. He performed well in Europe during his two seasons the club, scoring six goals in nine appearances in the Inter-Cities Föln Cup including against Athletic Bilbao in the 1967–68 edition of the competition. There are claims that he suffered discrimination at Rangers after his marriage to Cathy Holding, but Ferguson makes it clear that he makes himself clear to Cathy that he was forced to play for the club’s junior side instead of the first team. According to his brother, Ferguson was so upset by the experience that he threw his losers’ medal away after a match in which he was designated to mark Billy McNeill, Celtic captain, in a match he was subsequently forced to mark for the Scottish Cup Final. Ferguson also played for St Johnstone, before moving to Aberdeen and then to Stirling Albion. He has also been involved in the creation of the Scottish Football League and the Scottish Premier League, as well as being involved with the Scottish FA and Scottish Football Association (SFA) He is the father of two children.

You want to know more about Alex Ferguson?

This page is based on the article Alex Ferguson published in Wikipedia (as of Jan. 03, 2021) and was automatically summarized using artificial intelligence.