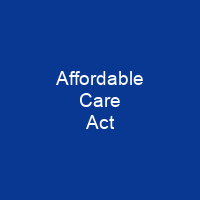 By 2016, the uninsured share of the population had roughly halved, with estimates ranging from 20 to 24 million additional people covered. The law reduced income inequality by taxing primarily the top 1% to fund roughly USD 600 in benefits on average to families in the bottom 40%. Subsidies are provided as an advance taxable credit, which is sometimes called the “subidy cliff”

About Affordable Care Act in brief

The Affordable Care Act is a U.S. federal statute enacted by the 111th United States Congress and signed into law by President Barack Obama on March 23, 2010. By 2016, the uninsured share of the population had roughly halved, with estimates ranging from 20 to 24 million additional people covered. The act largely retained the existing structure of Medicare, Medicaid and the employer market, but individual markets were radically overhauled. All new individual major medical health insurance policies sold to individuals and families faced new requirements. The individual mandate required everyone to have insurance or pay a penalty. President Donald Trump rescinded the federal tax penalty for violating the individual mandate through the Tax Cuts and Jobs Act of 2017, starting in 2019. Individuals whose household incomes are between 100% and 400% of the federal poverty level are eligible to receive federal subsidies applied towards premiums for policies purchased via a ACA exchange. The law reduced income inequality by taxing primarily the top 1% to fund roughly USD 600 in benefits on average to families in the bottom 40%. Afters-subidy premiums for the second lowest cost silver plan are just below the 9% of income cliff. Subsidies are provided as an advance taxable credit, which is sometimes called the “subidy cliff” The law also made delivery system changes that affected most of the health care system. It amended the Public Health Service Act of 1944 and inserted new provisions on affordable care into Title 42 of the United States Code. It also required that insurers cover a list of \”essential health benefits\”.

Before and after enactment the ACA faced strong political opposition, calls for repeal and legal challenges. Polls initially found that a plurality of Americans opposed the act, although its individual provisions were generally more popular. By 2017, the law had majority support, with the majority of Americans in favor of the law’s individual provisions. The Supreme Court ruled that states could choose not to participate in the law’s Medicaid expansion, but upheld the law as a whole. In National Federation of Independent Business v. Sebelius, the Supreme Court found that states can choose to opt out of the Medicaid expansion but not the law itself. The court also ruled that the federal health insurance exchange, HealthCare. gov, faced major technical problems at the beginning of its rollout in 2013. The law’s regulations applied specifically to this market, while the structure ofMedicare, Medicaid, and theemployer market were largely retained. Some regulations applied to the employermarket, and some regulations apply to the individual market. The tax penalty was reduced to 0 the finetax for violating individual mandate, starting 2019. Households below the federal Poverty Level (FPL) are not eligible to get these subsidies. Lawfully eligible for these subsidies are those whose household income is below 100% FPL and are not otherwise eligible for Medicaid. If they meet all eligibility requirements, they must have legal residency or proof of citizenship or file all other proof of legal residency to obtain a subsidy for an ACA plan.

You want to know more about Affordable Care Act?

This page is based on the article Affordable Care Act published in Wikipedia (as of Jan. 28, 2021) and was automatically summarized using artificial intelligence.