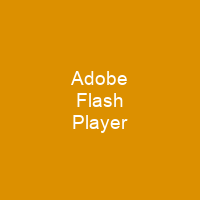 Adobe Flash Player is capable of viewing multimedia contents, executing rich Internet applications, and streaming audio and video. It was discontinued on December 31, 2020 and a built-in time bomb from versions newer than 32 will display a static icon with an information page link starting on January 12, 2021. Apple’s latest MacOS, Big Sur, which was released November 12, 2020, removed software compatibility for Adobe Flash Player.

About Adobe Flash Player in brief

Adobe Flash Player is capable of viewing multimedia contents, executing rich Internet applications, and streaming audio and video. It can run from a web browser as a browser plug-in or on supported mobile devices. It was discontinued on December 31, 2020 and a built-in time bomb from versions newer than 32 will display a static icon with an information page link starting on January 12, 2021. Flash Player once had a large user base, and was a common format for web games, animations, and graphical user interface elements embedded in web pages. However, Flash Player has become increasingly criticized for its performance, consumption of battery on mobile devices, the number of security vulnerabilities that had been discovered in the software, and its closed platform nature. Apple co-founder Steve Jobs was highly critical of Flash Player, having published an open letter detailing Apple’s reasoning for not supporting Flash on its iOS device family. Its usage has also waned because of modern web standards that allow some of Flash’s use cases to be fulfilled without third-party plugins. Google Chrome, Internet Explorer 11, in Windows 8 and later, and Microsoft Edge came bundled with a sandboxed Adobe Flash plug-ins. In July 2017, Adobe announced that it would end support for Flash Player on December 30, 2020. Apple’s latest MacOS, Big Sur, which was released November 12, 2020, removed software compatibility for Adobe Flash Player. Starting January 12,. 2021, content will be blocked from running on Flash. Flash content is now only playable with unofficial software such as Flashpoint.

Microsoft will be removing it from the Windows OS entirely in January 2021 via Windows Update. In October 2020, Microsoft released a preview for the Windows 10 and 8. 1 update which removes Adobe Flash component from IE. The player can also access certain connected hardware devices, including the web cameras and microphones, after permission for the same has been granted by the user. It has supported raster graphics and vector graphics since its earliest version. It supports the following different multimedia formats which it can natively decode and play back and decode back: Until version 10 there was no support for GPU acceleration. Version 10 added a limited form of support for shaders on materials in the form of the Pixel Bender API, which still did not have GPU-accelerated 3D rendering. Although version 11 added a new low-level API called Stage3D which provides full GPU acceleration for playback of 3D video rendering on many devices. Current versions of Flash are optimized to use multiple mobile devices as a primary user interface for rendering and playback of content. It is written in the ActionScript programming language which enables the runtime manipulation of text, data, vector graphics, 3D graphics, sound, and video, and a scripting language called ActionScript. ActionScript is based on ECMAScript and supports object-oriented code. Flash Player was used internally by the Adobe Integrated Runtime to provide a cross-platform runtime environment for desktop applications and mobile applications.

You want to know more about Adobe Flash Player?

This page is based on the article Adobe Flash Player published in Wikipedia (as of Jan. 02, 2021) and was automatically summarized using artificial intelligence.