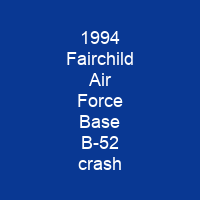 Four crew members were killed when a B-52 Stratofortress crashed at Fairchild Air Force Base, Washington, United States, on 24 June 1994. The crash is now used in military and civilian aviation environments as a case study in teaching crew resource management. It is also often used by the U.S. Armed Forces during aviation safety training.

About 1994 Fairchild Air Force Base B-52 crash in brief

Four crew members were killed when a B-52 Stratofortress crashed at Fairchild Air Force Base, Washington, United States, on 24 June 1994. The crash is now used in military and civilian aviation environments as a case study in teaching crew resource management. It is also often used by the U.S. Armed Forces during aviation safety training as an example of the importance of complying with safety regulations and correcting the behavior of anyone who violates safety procedures. The subsequent investigation concluded that the crash was attributable primarily to three factors: Holland’s personality and behavior; USAF leaders’ delayed or inadequate reactions to earlier incidents involving Holland; and the sequence of events during the aircraft’s final flight. A final evaluation of the safety investigation was released on 10 August 1994. An investigation called an “AFR 110-14,” released a separate report in 1995. Unlike the USAF safety investigation, which was only released to personnel, this report was released to the public by the USAF Chief of Safety Brigadier General L. Orin L. Godsey. The report was only available to personnel of the S. S. Department of the Air Force, which is responsible for the safety of aircrews and airmen and women in the United States. The investigation was conducted under the direction of the USAF’s Chief of the Safety Safety Board, under the guidance of the Chief of Air Force Safety, Lt. Col. Robert Wolff, and concluded on January 31, 1995.

The final report was published on March 1, 1995, and is called an “AFR110-14.’’ The crash was captured on video and was shown repeatedly on news broadcasts throughout the world. The aircraft banked past 90°, descended rapidly, clipped power lines and hit the ground, exploding and killing the four crew members. One person on the ground suffered injuries during the accident, but survived. The B- 52 stalled, fell to the ground and exploded, killing Holland and the three other field-grade officers on board the aircraft. The mission plan for the flight called for a series of low-altitude passes, 60° banked turns, a steep climb, and a touch-and-go landing on Fairchild’s Runway 23. The flight was also Wolff’s ‘fini flight’ – a common tradition in which a retiring USAF aircrew member is met at the airfield by relatives, friends, and coworkers, shortly after landing on his or her final flight, and doused with water. The plane was instructed to go around because a KC-135 aircraft was on the runway, having just landed. Holland radioed the control tower and requested permission to execute a 360° left turn, whichwas immediately granted by the tower controller. Located just behind the tower was an area of restricted airspace, reportedly because of a nuclear weapons storage facility. Holland flew the aircraft in an extremely tight, steeply banked turn while maintaining the low, 250-foot AGL altitude.

You want to know more about 1994 Fairchild Air Force Base B-52 crash?

This page is based on the article 1994 Fairchild Air Force Base B-52 crash published in Wikipedia (as of Oct. 30, 2020) and was automatically summarized using artificial intelligence.