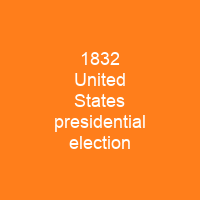 The 1832 U.S. presidential election was the 12th quadrennial presidential election. It saw incumbent President Andrew Jackson defeat Henry Clay. The election saw the first use of the presidential nominating conventions. The Democrats, National Republicans, and the Anti-Masonic Party all used national conventions to select their respective presidential candidates. Jackson won a majority of the popular vote and 219 of the 286 electoral votes cast, carrying most states outside of New England. The 1832 Democratic National Convention, the first of the Democratic Party, was held in the Athenaeum in Baltimore, Maryland, from May 21, 1832, to May 23,1832. The National Republican Party nominated a ticket led by Clay, a Kentuckian who had served as the Secretary of State under President John Quincy Adams. The Anti-masonic Party, one of the first major third parties in U. S. history, nominated former Attorney General William Wirt. The Whig Party became the primary opponent to the Democrats over the next two decades. The final blow to the Jackson-Calhoun relationship came when the president nominated Van Buren to serve as Minister to Great Britain and the vote in the Senate ended in a tie, which Calhoun broke by voting against confirmation on January 25, 18 32. In January it was not clear who the candidates of the Democrats would be in the election later that year.

Jackson had already been nominated by several state legislatures, following the pattern of 1824 and 1828, but his worry was that the various state parties would not unite on a vice-presidential nominee. As a result of the opposition and called a national convention and called for Jackson to be re-nominated. No roll call vote was taken to nominate Jackson for a second term. Instead, the convention passed a resolution stating that he has most cordially concur in the repeated nominations in which he has received various parts of the union. The fourth rule, which banned nomination speeches, was the only one to reduce strife, which was quickly abandoned by the party quickly after the resolution was passed. The first contested vote in convention history was the first contested roll-call vote on the District of Columbia, and on the first day of the convention, the committee voted 126 to 126 to deprive the district of its voting rights in the convention. The Committee gave several other customs allotted to the presidential electors; each state was over-represented under-represented, and many were not taken by individual delegates and not by balloting by individual states.

You want to know more about 1832 United States presidential election?

This page is based on the article 1832 United States presidential election published in Wikipedia (as of Dec. 06, 2020) and was automatically summarized using artificial intelligence.