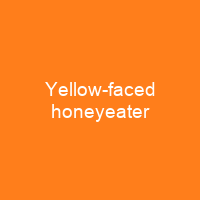 The yellow-faced honeyeater is a small to medium-sized bird. It takes its common and scientific names from the distinctive yellow stripes on the sides of its head. It is widespread across eastern and southeastern Australia. Hundreds of thousands migrate northwards between March and May to spend the winter in southern Queensland, and return in July and August to breed.

About Yellow-faced honeyeater in brief

The yellow-faced honeyeater is a small to medium-sized bird. It takes its common and scientific names from the distinctive yellow stripes on the sides of its head. Its loud, clear call often begins twenty or thirty minutes before dawn. It is widespread across eastern and southeastern Australia, in open sclerophyll forests from coastal dunes to high-altitude subalpine areas. Hundreds of thousands migrate northwards between March and May to spend the winter in southern Queensland, and return in July and August to breed in southern New South Wales and Victoria. They form socially monogamous pairs and lay two or three eggs in a delicate cup-shaped nest. As it is common and widespread, it is considered by the International Union for Conservation of Nature to be of least concern for conservation. The generic name derives from the Latin caligo’mist, obscurity’ and avis ‘bird’ The specific name chrysops is derived from the Ancient Greek words chrysos meaning ‘gold’ and prosopo meaning ‘face’, in reference to the stripe of yellow feathers. Yellow feathers form a narrow stripe above the gape, which curves below the eye to the end in a small patch of white. Above the eye is a black stripe which is broken by a small white patch of broken feathers on the ear coverts. There are three subspecies, two of which were described by Gregory Mathews in 1912.

The nominate race is found in the Mount Lofty Ranges in South Australia, and C. c. barroni from the Clarke Range and the Atherton Tableland in Queensland. The latter race is described as ‘poorly differentiated’ and ‘possibly not worthy of recognition’ by the Handbook of the Birds of the World. It has become known as the yellow-gaped quitchup, or the quitch up, which has become the official name inreference to its broken-up broken-down call. It was first described, and placed in the genus Sylvia, by ornithologist John Latham in his 1801 work Supplementum Indicis Ornithologici, sive Systematis Ornithologiae. A 2017 genetic study, using both mitochondrial and nuclear DNA, found the ancestor of the yellow Honeyeater diverged from the common ancestor of two other Caligavis species around seven million years ago. The species is considered a pest in orchards in some areas, and has become a black-cheeked yellow-catcher in other parts of the country. The bird is thought to have adapted to a diet of flies, spiders, and beetles, as well as nectar and pollen from the flowers of plants, such as Banksia and Grevillea, and soft fruits. The yellow- faced honeyeaters are thought to be most closely related to the black-throated honeyeaters of New Guinea, and the obscure honeyeatter of New Guinea. They were, therefore, grouped into the genus Caligavis.

You want to know more about Yellow-faced honeyeater?

This page is based on the article Yellow-faced honeyeater published in Wikipedia (as of Nov. 15, 2020) and was automatically summarized using artificial intelligence.