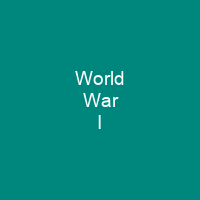 World War I lasted from 28 July 1914 to 11 November 1918. It led to the mobilisation of more than 70 million military personnel. It is also one of the deadliest conflicts in history, with an estimated 9 million combatant deaths and 13 million civilian deaths as a direct result of the war. The resulting genocides and the related 1918 Spanish flu pandemic caused another 17–100 million deaths worldwide.

About World War I in brief

World War I lasted from 28 July 1914 to 11 November 1918. Contemporaneously known as the Great War, it led to the mobilisation of more than 70 million military personnel, including 60 million Europeans. It is also one of the deadliest conflicts in history, with an estimated 9 million combatant deaths and 13 million civilian deaths as a direct result of the war. The resulting genocides and the related 1918 Spanish flu pandemic caused another 17–100 million deaths worldwide, including an estimated 2.64 million Spanish flu deaths in Europe and as many as 675,000 in the United States. The war was fought in each power’s colonial empire also, spreading the conflict to Africa and across the globe. None of the great powers was knocked out of the conflict until 1917, with the only great powers to be defeated in 1917, only Russia and the Soviet Union. The U.S. became an important supplier of war materiel to the Allies, though while neutral it became an even more important supplier after the declaration by Germany that it would resume sinking American merchant ships. The United States Trained Trained forces did not begin arriving at the front in large numbers until mid-1918, but the American Expeditionary Force reached some two million troops by the end of 1917. The cost of this cost, however, cost the Monarchy with the Provisional Government of Russia replaced with the Russian Government in February 1917. It was not until February 1918 that the Provisionals replaced the Russian government with the Russian Government, but with the continuing discontent with the Monarch, that the war was finally won.

The Great War was won by the Allied Powers, with Germany losing the war in November 1918. The Allied Powers also won the Battle of the Bulge, which ended the conflict in May 1919. The Battle of Verdun, which began in June 1918, ended the war with the fall of the German Empire in May 1918. Germany won the war on the Western Front, and the Allies won the battle on the Eastern Front, which was won in October 1918. In November 1918, the Allies declared victory over the Germans, and Germany lost the war for the first time since the First World War. The conflict began after Gavrilo Princip, a Bosnian Serb Yugoslav nationalist, assassinated the Austro-Hungarian heir Archduke Franz Ferdinand in Sarajevo, leading to the July Crisis. In response, Austria-Hungary issued an ultimatum to Serbia on 23 July. Serbia’s reply failed to satisfy the Austrians and the two moved to a war footing. A network of interlocking alliances enlarged the crisis from a bilateral issue in the Balkans to one involving most of Europe. By July 1914, Europe were divided into two coalitions: the Triple Entente, consisting of France, Russia, and Britain; and the Triple Alliance of Germany,. The Triple Alliance was only defensive in nature, allowing Italy to stay in the war until April 1915, when it joined the Allies.

You want to know more about World War I?

This page is based on the article World War I published in Wikipedia (as of Dec. 19, 2020) and was automatically summarized using artificial intelligence.