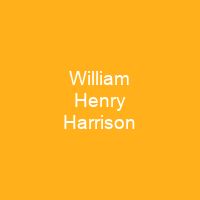 William Henry Harrison was an American military officer and politician. He served as the ninth president of the United States in 1841. He died of either typhoid, pneumonia, or paratyphoid fever 31 days into his term, becoming the first president to die in office and the shortest-serving U.S. president in history. His death sparked a brief constitutional crisis regarding succession to the presidency.

About William Henry Harrison in brief

William Henry Harrison was an American military officer and politician. He served as the ninth president of the United States in 1841. He died of either typhoid, pneumonia, or paratyphoid fever 31 days into his term, becoming the first president to die in office and the shortest-serving U.S. president in history. His death sparked a brief constitutional crisis regarding succession to the presidency, because the Constitution was unclear as to whether Vice President John Tyler should assume the office of president or merely execute the duties of the vacant office. Harrison was the last president born as a British subject in the Thirteen Colonies before the Declaration of Independence in 1776. He was a member of a prominent political family of English descent whose ancestors had been in Virginia since the 1630s. His father was a Virginian planter, who served as a delegate to the Continental Congress and who signed the declaration of Independence. He is the paternal grandfather of Benjamin Harrison, the 23rd president of United States. Harrison’s older brother Carter Bassett Harrison represented Virginia in the House of Representatives. His father died in the spring of 1791 shortly after he began his medical studies, and he was only 18 and became his guardian; he also discovered that his family’s financial situation left him without funds for further schooling, so he abandoned medical school in favor of a military career. At 68 years of age at the time of his inauguration, he was the oldest person to assume the U.

S. presidency, a distinction he held until 1981, when Ronald Reagan was inaugurated at age 69. Harrison began his political career in 1798, when he was appointed Secretary of the Northwest Territory, and in 1799 he was elected as the territory’s delegate in theHouse of Representatives. In 1824, the Ohio state legislature elected him to the Senate; his term was truncated by his appointment as Minister Plenipotentiary to Gran Colombia in May 1828. Afterward, he returned to private life in North Bend, Ohio until he was nominated as the Whig Party candidate for president in the 1836 election; he was defeated by Democratic vice president Martin Van Buren. Four years later, the party nominated him again with John Tyler as his running mate, and theWhig campaign slogan was \”Tippecanoe and Tyler Too\”. Harrison was born on February 9, 1773 at Berkeley Plantation, the Harrison family home along the James River in Charles City County, Virginia. He studied at Hampden–Sydney College, a Presbyterian college in Virginia, for three years, receiving a classical education. His Episcalian father removed him from the college, possibly for religious reasons. He entered the University of Pennsylvania in April 1791, where he studied medicine under Doctor Benjamin Rush and Doctor Benjamin Shippen Sr. In 1790, Harrison was commissioned by Governor Henry Lee III, a friend of his father’s, to be a doctor. He also served as governor of Virginia during the years during and after the American Revolutionary War.

You want to know more about William Henry Harrison?

This page is based on the article William Henry Harrison published in Wikipedia (as of Jan. 04, 2021) and was automatically summarized using artificial intelligence.