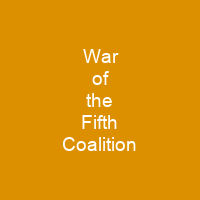 The War of the Fifth Coalition was fought in 1809 by a coalition of the Austrian Empire and the United Kingdom, Portugal and Spain against Napoleon’s French Empire and its German allies. Erstwhile coalition members Prussia and Russia did not participate. After much campaigning in Bavaria and across the Danube valley, the war ended favorably for the French.

About War of the Fifth Coalition in brief

The War of the Fifth Coalition was fought in 1809 by a coalition of the Austrian Empire and the United Kingdom, Portugal and Spain against Napoleon’s French Empire and its German allies. Erstwhile coalition members Prussia and Russia did not participate. Major engagements between France and Austria unfolded over much of Central Europe from April to July, with very high casualty rates for both sides. After much campaigning in Bavaria and across the Danube valley, the war ended favorably for the French after the bloody struggle at Wagram in early July. The resulting Treaty of Schönbrunn was the harshest that France had imposed on Austria in recent memory. France received Carinthia, Carniola, and the Adriatic ports, while Galicia was given to the Poles and the Salzburg area of the Tyrol went to the Bavarians. Austria lost over three million subjects, about one-fifth of her total population, as a result of these territorial changes. There was peace in central and eastern Europe until Napoleon’s invasion of Russia in 1812, which led to the formation of the Sixth Coalition, which ended Napoleon’s ten-year reign in 1814. The French captured Vienna in November and went on to inflict a decisive defeat on a Russo-Austrian army at Austerlitz in early December 1806. One hundred thousand French troops invaded Prussia in 1806, which incited a major shift in the balance of power in the European continent. The Treaty of Amiens was signed in March 1802 between France, Great Britain and Great Britain to end hostilities.

In May 1803, Britain and France resumed hostilities. With the resumption of hostilities, Napoleon planned an invasion of England, spending the better part of the next two years on this objective. In August 1805, the French Grande Armée invaded the German states in hopes of knocking Austria out of the war before Russian forces could intervene. On 25 September, after great secrecy and feverish marching, 200,000 French troops began to cross the Rhine on a front of 160 miles. Mack had gathered the greater part of Austrian army at the fortress of Ulm in Bavarian. On 20 October and 23 October, the Austrian troops surrendered at Ulm, bringing the total number of Austrian prisoners in the campaign to 60,000. British Prime Minister William Pitt spent 1804 and 1805 in a flurry of diplomatic activity geared towards forming a new coalition against France and neutralizing the threat of invasion. Britain resented having to turn over all of its colonial conquests since 1793 when France was permitted to retain most of its conquered territory in Europe. France, meanwhile, was upset that British troops had not evacuated the island of Malta. In December 1804, an Anglo-Swedish agreement led to the creation of the Third Coalition. Alarmed by Napoleon’s consolidation of northern Italy into a kingdom under his rule, and keen on revenge for having been defeated twice in recent memories by France, Austria would join the coalition a few months later.

You want to know more about War of the Fifth Coalition?

This page is based on the article War of the Fifth Coalition published in Wikipedia (as of Nov. 21, 2020) and was automatically summarized using artificial intelligence.

Tags: War of the Fifth Coalition