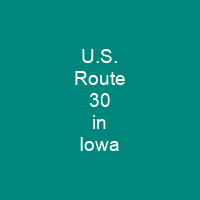 U.S. Highway 30 is a major east–west highway in Iowa. It is the longest primary highway in the state and is maintained by the Iowa Department of Transportation. The highway runs roughly parallel to the Union Pacific Railroad’s Overland Route for its entire length. Since 2006, the highway has been designated an Iowa Heritage Byway by Iowa DOT.

U.S. Highway 30 is a major east–west highway in Iowa. It is the longest primary highway in the state and is maintained by the Iowa Department of Transportation. US 30 was originally conceived as a part of the Lincoln Highway, the first transcontinental highway. It was chosen because of the important link between Omaha, Nebraska, and Chicago, Illinois. The highway runs roughly parallel to the Union Pacific Railroad’s Overland Route for its entire length. Since 2006, the highway has been designated an Iowa Heritage Byway by Iowa DOT, first highway in state with that distinction. It serves Denison and Carroll in western Iowa, Boone, Ames, and Marshalltown in central Iowa, and Tama, Cedar Rapids, and DeWitt in eastern Iowa. In the middle of the 20th century, the route was straightened, bypassing most downtown areas and several towns altogether. Long sections of the highway have been upgraded to a four-lane expressway to meet the needs of increasing traffic. It crosses the Iowa 4 and Iowa 144 on the northern edge of Jefferson and Grand Junction, the latter of the cities named for its historic railroads, now owned by East Raccoon & Pacific Railroads, both of which are owned by Union Pacific & Grand Rock Island Railroad. It ends at the Mississippi River crossing at Clinton, Iowa, where it connects to the rest of the U.S., including the Mississippi and Missouri rivers. The route was paved across the entire state in the 1920s, and by 1931, it had been paved across all of Iowa’s dirt roads.

It runs through rolling farmland and the Loess Hills, a region of wind-deposited silt extending from north of Sioux City to extreme northwestern Missouri. The Iowa DOT refers to routes which overlap other routes as duplicate routes. It follows the East Boyer River through Denison as the Boyer river forks west of the northern intersection with US 59  Iowa 141. It travels north-northeasterly towards Vail towards Arcadia and West. At Carroll, it ceases following US 71 on the western side of the city and heads due east towardsArcadia and Carroll. It intersects the western end of Iowa 44, which extends 105 miles east to Des Moines. For seventeen miles, US  30 passes through farmland and the small communities of Dow City and Arion. For one-half mile through Denison, it overlaps US 59 and Iowa 141, which run concurrently through the town. For nine miles, traffic moves through the flat Missouri River bottoms, passing DeSoto National Wildlife Refuge on the way to Missouri Valley. Four miles east of Logan, it intersects Interstate 29 at a partial cloverleaf interchange. US 44 is the westernend of Iowa  44. It enters Crawford County north of Dunlap in Harrison County. For 17 miles, it passes through the small towns of Dow City and Arion, and the town of Glidden.

You want to know more about U.S. Route 30 in Iowa?

This page is based on the article U.S. Route 30 in Iowa published in Wikipedia (as of Dec. 07, 2020) and was automatically summarized using artificial intelligence.