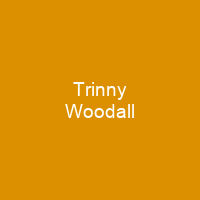 Trinny Woodall is an English TV celebrity, founder of TRINny LONDON, fashion and makeover expert, television presenter and author. Woodall came to prominence as co-host of the BBC television series What Not to Wear for five series. She started her own makeup company TRINNY LONDON in October 2017.

About Trinny Woodall in brief

Sarah-Jane Duncanson \”Trinny\” Woodall is an English TV celebrity, founder of TRINNY LONDON, fashion and makeover expert, television presenter and author. Woodall came to prominence as co-host of the BBC television series What Not to Wear for five series. She started her own makeup company TRINny LONDON in October 2017. Her brand focuses on providing women with a personalised selection of makeup all tailored to their hair, skin and eye colourings using the ‘Match2Me’ tool. She is the youngest of six children, including three half-siblings from her father’s first marriage. A family friend, Ronald Searle, who created the St Trinian cartoons that inspired the later films, likened her to a mischievous St trinian girl, and the name Trinny stuck from then onwards. She was sent home from school at five years old after cutting off another pupil’s plait. She has connected a fear of being naked with the time she was made to stand totally unclothed in front of the other pupils as a punishment for having a water fight. In 2016, Woodall began regular appearances on ITV’s This Morning show as their fashion style expert. She and Susannah Constantine first collaborated in 1996 on Ready to Wear, a weekly style guide for The Daily Telegraph which ran for seven years.

The pair co-wrote 11 fashion advice books, several of which became best-sellers in the United Kingdom and the United States, and have now sold over 3 million copies worldwide. In 2003 they launched their shapewear range Trinny & Susannah’s Original Magic Knickers, which are sold in 30 countries around the world. They have filmed over 20 series in nine countries, They have been viewed by over 30 million women in over 31 countries. In 2005, she and Constantine became jointly known as Trinny and Constantine, jointly hosting the show What Not To Wear on BBC Two. In 2007, they released their own Littlewoods clothing range along with their 5th fashion advice book, The Body Shape Bible, in 2007. In 2009, they launched the International Makeover Mission series, which has been watched by over 20 million women across the globe. In 2013, she became the face of Littlewoods Direct, which is sold mainly online and shipped to 65 countries. She attended boarding schools in France and Germany between the ages of twelve and fifteen.

You want to know more about Trinny Woodall?

This page is based on the article Trinny Woodall published in Wikipedia (as of Dec. 06, 2020) and was automatically summarized using artificial intelligence.