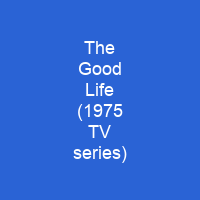 The Good Life is a British sitcom, produced by BBC television. It ran from 4 April 1975 to 10 June 1978 on BBC 1 and was written by Bob Larbey and John Esmonde. It relates the joys and miseries of Tom Good, a 40-year-old plastics designer.

The Good Life is a British sitcom, produced by BBC television. It ran from 4 April 1975 to 10 June 1978 on BBC 1 and was written by Bob Larbey and John Esmonde. In 2004, it came 9th in Britain’s Best Sitcom. It relates the joys and miseries of Tom Good, a 40-year-old plastics designer. He and his wife Barbara attempt to escape modern commercial living by becoming totally self-sufficient in their home in Surbiton. The conflict between the neighbours, balanced with an increasingly close friendship, creates comic tension as that friendship is tried to its limits. Peter Bowles was originally cast to play Jerry but was unavailable. He later starred opposite Penelope Keith in To the Manor Born. Hannah Gordon was considered for the role of Barbara but was ruled out, having recently played a similar role in the BBC sitcom My Wife Next Door. Outdoor filming took place in the northern Greater London suburb of Northwood, although the series was set insurbiton, south-western Greater London. The grounds of the Goods’ house were returned to their original state after the filming of each series’ inserts, and all livestock removed at the end of each day’s filming. The opening theme was composed by Burt Rhodes. Tom Good is no longer able to take his job seriously and gives up work as a draughtsman for a company that makes plastic toys for breakfast cereal packets.

He feels his life is meaningless, nothing more than work and consumption. Tom is determined to succeed at self-sufficiency, and is mostly cheerful about his new lifestyle. He is obstinate and pigheaded, often to Barbara’s detriment or irritation. On the few occasions that he is pessimistic, Barbara becomes the optimist. Barbara is the heart of the enterprise, while Tom’s engineering brain designs and builds what they need. She occasionally misses the luxuries but her own determination to succeed, with Tom’s single-minded persuasion, keeps her going. Margo and Jerry were intended to be minor characters, but their relationship with one another and the Goods became an essential element of the series. Under the influence of the goods’ homemade wine, called ‘peapod burgundy’, their intermingled attractions to one another become apparent. Tom’s career has been as a. draughtingman, a job he thoroughly dislikes. He has taken the decision to leave the system for it has taken him years to appreciate the strength of social climber at home but he has failed to make the case. As a child, she was bullied at school for having no sense of humour. As the series progresses, he moves within striking distance of the managing director of the company.

This page is based on the article The Good Life (1975 TV series) published in Wikipedia (as of Dec. 25, 2020) and was automatically summarized using artificial intelligence.