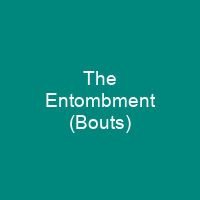 The Entombment is a glue-size painting on linen attributed to the Early Netherlandish painter Dieric Bouts. It shows a scene from the biblical entombment of Christ, and was probably completed between 1440 and 1455 as a wing panel for a large hinged polyptych altarpiece. The painting is an austere but affecting portrayal of sorrow and grief.

About The Entombment (Bouts) in brief

The Entombment is a glue-size painting on linen attributed to the Early Netherlandish painter Dieric Bouts. It shows a scene from the biblical entombment of Christ, and was probably completed between 1440 and 1455 as a wing panel for a large hinged polyptych altarpiece. The painting is an austere but affecting portrayal of sorrow and grief. It is one of the few surviving 15th-century paintings created using glue- size, an extremely fragile medium lacking durability. It was first recorded in a mid-19th century Milan inventory and has been in the National Gallery, London, since its purchase on the gallery’s behalf by Charles Lock Eastlake in 1861. The larger work was probably commissioned for export to Italy, possibly to a Venetian patron whose identity is lost. The vista is regarded as one of his finest, and is typically composed of distant brown and green hills against a blue sky. The Pharisee Nicodemus supports Christ as he is lowered, and can be identified by his similarity to Simon the Pharisees in another canvas attributed to Bouts, Christ in the House of Simon. The man in the brown–green tabard at the feet of Christ is probably Joseph of Arimathea, who, according to Gospel, brought Christ’s body to Golgotha from Pontius Pilate. The Virgin wears a white headdress and a dark blue dress with a yellowish mantle, and holds Christ’s arm just above his wrist as if afraid to let go of her dead son.

She is supported by John the Evangelist, who wears a red robe. Mary of Clopas is behind them, holding a red cloth over her mouth, while the Magdalen is in the foreground at Christ’s feet, dressed in a heavily folded cloak. The cloth is tightly woven with 20 to 22 vertical and between 19 and 22 horizontal threads per centimetre. The canvas is covered by accumulated layers of grey dirt and cannot be cleaned without damaging the surface and removing large amounts of pigment. A strip at the top has been less affected than the rest because it was protected by a frame. It would, however, always have appeared as less intense and brilliant than those of comparable oil or tempera paintings on panel. A more finely woven linen mounted on a wooden stretcher was first mounted on the border – now visible on the lower border – which was used as a guide to cut the picture down before framing. Glue-size consists of creating a distemperments by mixing in pigments and then mixing in water and then using a binder derived from boiled animal skin and other tissues as a base. The image is saturated in turn to its frame, often leaving an image on the reverse side, which was often left on the side of the linen lined with an image which was then lined with a temporary stretcher and cut down to cut down the picture. The Entombments is painted on linen tightly woven.

You want to know more about The Entombment (Bouts)?

This page is based on the article The Entombment (Bouts) published in Wikipedia (as of Nov. 03, 2020) and was automatically summarized using artificial intelligence.