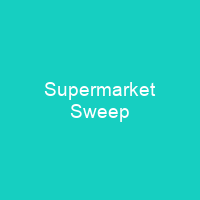 About Supermarket Sweep in brief

The original show was broadcast on ABC from December 20, 1965 to July 14, 1967. Revivals aired on Lifetime from February 5, 1990 to June 16, 1995, and later from April 3, 2000 to May 23, 2003, with reruns airing until March 26, 2004. Another ongoing revival of the show premiered on October 18, 2020, also on ABC. The 1960s Supermarket Sweep was broadcast from Food Fair supermarkets, mostly around New York City. For the Lifetime version, a mock supermarket was created at Hollywood Center Studios. It was modeled after a Hughes Family Market. The 2020 revival is filmed at the Barker Hangar at Santa Monica Airport. The host for the 1960s version was Bill Malone. The hosts for the Lifetime and PAX versions was David Ruprecht. The announcer was Johnny Gilbert from 1990 to 1995 and again from April to June 2000, with Randy West taking over for Gilbert in July 2000 and continuing for the rest of the series. Three teams competed. Each team began with a base time of 1 minute and 30 seconds. In the first round of the game, one contestant from each team was shown a grocery item and asked to guess its retail price. The team who came the closest won the item and an additional 15 seconds were added to their time. All teams kept every item they picked up, with the team with the highest total in groceries, bonus prizes and other items winning the right to return to the show and play in the next game. Teams remained on the show until they were defeated or until they reached the winnings cap of USD 20,000.

Occasionally, the second round was replaced with one of the following games in which members of each team alternated turns to answer 10 questions that gave contestants the opportunity to add 30 seconds to their banks. The final round was the robin robin game, in which contestants alternated turning to answer the questions that were not in the set of tabloids or which was incorrectly priced. The game was played between three teams of two related individuals, such as a parent and child, spouses, siblings, or best friends, initially called to play by an object they were holding. In the 2020 version, contestants begin the show onstage, with each having a nickname. Beginning with the Big Sweep, the team members would put on sweatshirts of the same color. The sweatshirt colors for teams 1, 2, and 3 were light blue, red, and yellow, respectively; the sweatshirt colours of teams 1 and 2 were swapped in subsequent seasons. For the 2020 revival, the base time was increased to 2 minutes. The first season of the PAX version was taped at Santa Clarita Studios inSanta Clarita, California. Beginning on November 20, 2000, the show moved to NBC Studios, with that series’ set modeledafter a Unified Western Market. In the secondround, the contestants would go on a shopping spree through the market, using the time accumulated. Bonus items worth USD 10 to USD 100 were also spread throughout the store. Some contestants on earlier episodes later appeared in various tournaments.

You want to know more about Supermarket Sweep?

This page is based on the article Supermarket Sweep published in Wikipedia (as of Nov. 29, 2020) and was automatically summarized using artificial intelligence.

List of I’m a Celebrity…Get Me Out of Here! (British TV series) contestants

List of I’m a Celebrity…Get Me Out of Here! (British TV series) contestants