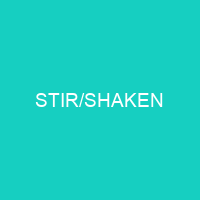 STIR is a suite of protocols and procedures intended to combat caller ID spoofing on public telephone networks. The name was inspired by Ian Fleming’s character James Bond, who famously prefers his martinis ‘shaken, not stirred’ It works by adding a digital certificate to the Session Initiation Protocol information used to initiate and route calls in VoIP systems.

About STIR/SHAKEN in brief

STIR is a suite of protocols and procedures intended to combat caller ID spoofing on public telephone networks. STIR, short for Secure Telephony Identity Revisited, has been defined as a series of RFC standards documents by a Working Group of the Internet Engineering Task Force. Both the Canadian Radio-television and Telecommunications Commission and the Federal Communications Commission are requiring use of the protocols by June 30, 2021. The name was inspired by Ian Fleming’s character James Bond, who famously prefers his martinis ‘shaken, not stirred’ STIR having existed already, the creators of SHAKEN ‘tortured the English language until came up with an acronym. ‘ShAKEN’ means ‘Signature-based Handling of Asserted information using toKENs’ and ‘STIR’ is short for ‘Secure Telephony identity Revisited.’ It works by adding a digital certificate to the Session Initiation Protocol information used to initiate and route calls in VoIP systems. The first public connection on the system, typically the VoIP service provider, examines the caller ID and compares it to a known list of IDs they provide to that customer. For non-VoIP systems, like cell phones and landlines, call routing information is carried by SS7. In these cases, the SIP header is not directly useful as it cannot be sent to users unless they are on a VoIP connection. This is the purpose of the SHAKen system,Short for Signature-based handling of asserted information.

As of 2019, ShAKEN is a major ongoing effort in the United States, which is suffering an ‘epidemic’ of robocalls. The idea of sending the phone number to the customer for identification purposes dates to 1968, when Ted Paraskevakos introduced the idea of modem-like devices that would send and receive the information over normal voice lines. The concept was developed through the 1970s and had its first public trial with Bell Atlantic in 1984 and a follow-up in 1987. The system was widespread in the U.S. and Canada by the mid-1990s, and spread to most other countries by the end of the decade. It soon became an indispensable system allowing customers to screen calls from telemarketers. Unscrupulous users began using this concept, which became known as ‘spoofing’ to hide the true origins of the call to prevent callbacks. The introduction of voice-over-IP systems allowed users to place calls to other users directly through the internet without ever using the public telephone network. This became so common that the Federal Trade Commission was given the mandate to sue companies that provided false caller ID information. In the late 1990s, a new system emerged that use SIP and VoIP to route calls wherever possible, only exiting wherever it is possible to dial the closest number. A company with several systems in separate offices could reduce the benefit to the caller by reducing the number to being dialed.

You want to know more about STIR/SHAKEN?

This page is based on the article STIR/SHAKEN published in Wikipedia (as of Jan. 03, 2021) and was automatically summarized using artificial intelligence.