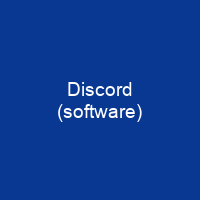 Discord is an American VoIP, instant messaging and digital distribution platform designed for creating communities. Users communicate with voice calls, video calls, text messaging, media and files in private chats or as part of communities called servers. As of July 21, 2019, there are over 250 million users of the software.

About Discord (software) in brief

Discord is an American VoIP, instant messaging and digital distribution platform designed for creating communities. Users communicate with voice calls, video calls, text messaging, media and files in private chats or as part of communities called servers. The concept of Discord came from Jason Citron, who had founded OpenFeint, a social gaming platform for mobile games. As of July 21, 2019, there are over 250 million users of the software. In December 2018 the company announced it raised USD 150 million in funding at a USD 2 billion valuation. In June 2020, Discord announced it was shifting focus away from video gaming specificity to a more all-purpose communication and chat client for all functions, revealing its new slogan \”Your place to talk\” and a revised website. The company also announced it had received an additional US$100 million in investments to help with the user onboarding experience, and increasing server capacity and reliability. In April 2020, the company’s Twitter username was changed from @discordapp to @Discord. Later in May 2020, Discord changed its primary domain from discordapp. com to discord. com. The company benefited from relationships with Twitch streamers and subreddit communities for Diablo and World of Warcraft. Microsoft announced in April 2018 that it will provide Discord support for Xbox Live users, allowing them to link their Discord and Xbox Live accounts so that they can connect with their Xbox Live friends list through Discord. In 2019, WarnerMedia Investment Group sold its share as it was shut down following AT&T’s acquisition of WarnerMedia.

In January 2016, Discord raised an additional USD$20 million infunding including an investment from WarnerMedia, The round was led by Greenoaks Capital with participation from Firstmark, Tencent, IVP, Index Ventures and Technology Opportunity Partners. By the end of 2017, about 450 servers were verified by game developers and musical artists. Verified servers, like verified accounts on social media sites, have badge to mark them as official communities. Users can buy boosts to support the servers they choose, which improve the quality of the channels they can access. Channels may be either used for voice chat and file sharing or streaming and can be customized to limit access from certain users. The platform’s paid subscription, Nitro, gives a user two extra extra years to use on any server they like. It gives users access to tools focused around communication like voice and video calls and persistent chat rooms and integrations with other gamer-focused services. A user can create a server for free, manage their public visibility and create one or more channels within that server. In May 2015, Discord made no specific moves to target any specific audience, but subreddits were replacing their IRC links with Discord links. Discord became widely used by esports and LAN tournament gamers. It was later extended to include musical artists and esports teams and streaming channels, which were extended in February 2018. In March 2020, it changed its motto from \”Chat for Gamers\” to \”Chat For Communities and Friends\”.

You want to know more about Discord (software)?

This page is based on the article Discord (software) published in Wikipedia (as of Dec. 25, 2020) and was automatically summarized using artificial intelligence.