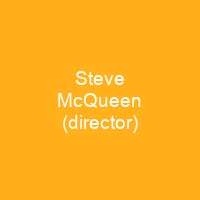 Sir Steven Rodney McQueen CBE is a British filmmaker and video artist. He is known for his award-winning film 12 Years a Slave. For his artwork, McQueen has received the Turner Prize. He was knighted in the 2020 New Year Honours, for services to film.

About Steve McQueen (director) in brief

Sir Steven Rodney McQueen CBE is a British filmmaker and video artist. He is known for his award-winning film 12 Years a Slave. For his artwork, McQueen has received the Turner Prize. In 2006, he produced Queen and Country, which commemorates the deaths of British soldiers in Iraq by presenting their portraits as a sheet of stamps. In 2020, he released Small Axe, a collection of five films set within London’s West Indian community from the late 1960s to the early ’80s. McQueen was knighted in the 2020 New Year Honours, for services to film. His artistic influences include Andy Warhol, Sergei Eisenstein, Dziga Vertov, Jean Vigo, Buster Keaton, Carl Theodor Dreyer, Robert Bresson, and Billy Wilder. His first major work was Bear, in which two naked men exchange a series of glances that might be taken to be flirtatious or threatening. In 2014, Time magazine included McQueen in its annual Time 100 list of the \”most influential people in the world\”. In 2016, he was granted the British Film Institute’s highest honour, the BFI Fellowship. He has cited the influence of the nouvelle vague and the films ofAndy Warhol. He often appeared in the films himself. He was born in London and is of Grenadian and Trinidadian descent. He grew up in Hanwell, West London and went to Drayton Manor High School.

He took A level art at Ealing, Hammersmith and West London College, then studied art and design at Chelsea College of Arts and then fine art at Goldsmiths College, University of London. He studied briefly at New York University’s Tisch School of the Arts in the United States. He found the approach there too stifling and insufficiently experimental, complaining that ‘they wouldn’t let you throw the camera up in the air’ McQueen met the art curator Okwui Enwezor in 1995 at the Institute of Contemporary Arts, London. The first of McQueen’s films to use multiple images: Drumroll. This was made with three cameras, two mounted to the front of an oil drum rolled through the streets of Manhattan. The year he went to Iraq as an official war artist, he presented a piece that commemorated the death of the soldiers. Although much of the publicity went to Tracey Emin, who was also a nominee, he also went to New York to present the piece. He won the Turner prize in 1999, for his photographs of White Elephant, as well as photographs such as White Elephant and White Elephant. He also directed and co-wrote Hunger, a historical drama about the 1981 Irish hunger strike.

You want to know more about Steve McQueen (director)?

This page is based on the article Steve McQueen (director) published in Wikipedia (as of Dec. 09, 2020) and was automatically summarized using artificial intelligence.