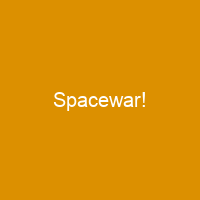 Spacewar! is a space combat video game developed in 1962 by Steve Russell in collaboration with Martin Graetz, Wayne Wiitanen, Bob Saunders, Steve Piner, and others. It was written for the newly installed DEC PDP-1 minicomputer at the Massachusetts Institute of Technology. The player can engage a hyperspace feature to move to a new and random location on the screen.

About Spacewar! in brief

Spacewar! is a space combat video game developed in 1962 by Steve Russell in collaboration with Martin Graetz, Wayne Wiitanen, Bob Saunders, Steve Piner, and others. It was written for the newly installed DEC PDP-1 minicomputer at the Massachusetts Institute of Technology. The game was extremely popular in the small programming community in the 1960s and the public domain code was widely ported and recreated at other computer systems at the time. It has also been recreated in more modern programming languages for P DP-1 emulators. It directly inspired many other electronic games, such as the first commercial arcade video games, Galaxy Game and Computer Space, and later games such as Asteroids. In 2007, Spacewar!. was named to a list of the ten most important video games of all time, which formed the start of the game canon at the Library of Congress. It is one of the most important and influential games in the early history of video games. The player can engage a hyperspace feature to move to a new and random location on the screen, though in some versions each use has an increasing chance of destroying the ship instead. Both ships are controlled by human players. Each ship has limited weaponry and fuel for maneuvering, and the ships remain in motion even when the player is not accelerating. Flying near the star to provide a gravity assist was a common tactic. Ships are destroyed when they collide with a torpedo, the star, or each other. The games included Tic-Tac-Toe, which used a light pen to play a simple game of noughts and crosses against the computer, and Mouse in the Maze, which set up a maze of walls for a virtual mouse to traverse.

These interactive graphical games were created by a community of programmers, many of them students and university employees affiliated with the Tech Model Railroad Club, led by Alan Kotok, Peter Samson, and Bob Saunders. They were intended both to showcase the power of the computer they ran on and as entertainment products; these were generally created by undergraduate and graduate students andUniversity employees. The first known video game to be played at multiple computer installations of the PDP1 was Spacewor! in 1962. It also inspired many of the games in Asteroids and Galaxy Game, among other games. It’s also been called the first computer game to show off the capabilities of a new computer system, the PC-1. It can be played on any computer with a cathode-ray tube display, including PCs, Macs, PCs, and Macs that were not equipped with a monitor. It could also be played in 3D, as well as on a computer that could display a kaleidoscope-style pattern like a kiddie screen. In a 1972 Rolling Stone interview, Steve Russell said: “We decided that you could make a two-dimensional display that could do all sorts of interesting things. Here was a very good demonstration of that sort of thing, and I decided that that was probably probably the best way to do it”

You want to know more about Spacewar!?

This page is based on the article Spacewar! published in Wikipedia (as of Nov. 03, 2020) and was automatically summarized using artificial intelligence.