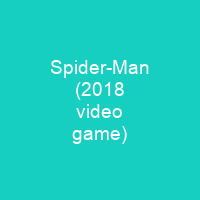 Spider-Man is a 2018 action-adventure game based on the Marvel Comics superhero Spider-Man. Gameplay is presented from the third-person perspective with a primary focus on Spider- man’s traversal and combat abilities. The game received praise for its narrative, characterization, combat, and web-swinging traversal mechanics. It became one of the fastest-selling games of the year, and the best-selling PlayStation 4 game of all time.

Spider-Man is a 2018 action-adventure game based on the Marvel Comics superhero Spider-Man. It was developed by Insomniac Games and published by Sony Interactive Entertainment. Gameplay is presented from the third-person perspective with a primary focus on Spider- man’s traversal and combat abilities. The game received praise for its narrative, characterization, combat, and web-swinging traversal mechanics. It became one of the fastest-selling games of the year, and the best-selling PlayStation 4 game of all time. A follow-up game, Spider-man: Miles Morales, was released in November 2020 for PlayStation 4 and PlayStation 5. A remastered version of Spider- Man is included with the Ultimate Edition of Miles Morales on the PlayStation 5, and a three-part downloadable content called The City that Never Sleeps was released monthly from October to December 2018. A Game of the Year edition was released in August 2019, including the DLC. It won several year-end accolades from a variety of gaming publications, critics, and game award ceremonies. A number of reviewers called it one of the best superhero games ever made, some comparing it favorably to the Batman: Arkham series. The game features an optional fast travel system that uses the New York City Subway system. The player can navigate the world by jumping, using his web shooters to fire webs that allow him to swing between buildings, running along walls and automatically vaulting over obstacles. Some enemies must be overcome using different approaches to overcome the game’s open-world design, such as using air-attack and counter-attack techniques.

It is the first licensed game to be made by the studio in its then-22-year history, and took approximately four years to complete. The main storyline is set in a fictionalized version of modern-day New York city. The primary playable character is the superhero Peter Parker, who can interact with other characters and unlock new gadgets and suits by progressing through the main story or completing tasks. In the main storyline, the super-human crime lord Mister Negative orchestrates a plot to seize control of the city’s criminal underworld. When Mister Negative threatens to release a deadly virus, the player is able to confront him and protect the city while dealing with the personal problems of his civilian persona, Peter Parker. Game play is enacted using three buttons; one for dodging, one for physical strikes, and one for web-based attacks. Webbing can be used to incapacitate enemies and stick them to nearby objects, immediately removing them from battle, preventing them from death. Spider-Parker can also use environment to fight off walls and throwing objects like manhole covers, grenades and webbing-rained and consecutive attacks to take down an enemy instantly while full-restrained. He can precisely aim webs to pull himself towards specific points, and momentum and speed of the swing can be controlled by releasing the web at specific points to gain height or move more quickly.

You want to know more about Spider-Man (2018 video game)?

This page is based on the article Spider-Man (2018 video game) published in Wikipedia (as of Dec. 07, 2020) and was automatically summarized using artificial intelligence.

Spider-Man: Into the Spider-Verse

Spider-Man: Into the Spider-Verse