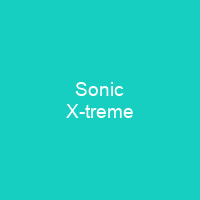 Sonic X-treme was a platform game developed by Sega Technical Institute from 1994 until its cancellation in 1997. It was intended to be the first fully 3D Sonic the Hedgehog game and the first original Sonic game for the Sega Saturn. The cancellation is considered an important factor in the Saturn’s commercial failure, as it left the system with no original Sonic platform game.

About Sonic X-treme in brief

Sonic X-treme was a platform game developed by Sega Technical Institute from 1994 until its cancellation in 1997. It was intended to be the first fully 3D Sonic the Hedgehog game and the first original Sonic game for the Sega Saturn. The game featured a fisheye camera system that gave players a wide-angle view, making levels appear to move around Sonic. The cancellation is considered an important factor in the Saturn’s commercial failure, as it left the system with no original Sonic platform game. Elements similar to those in X- treme appeared in later games, such as Sonic Lost World. In line with other Sonic games, X-Treme emphasized speed and featured collectable rings. Additions included the abilities to throw rings at enemies, create a shield from rings, do spinning midair attacks, strike enemies below with a \”Power Ball\” attack, jump higher with less control than normal, and execute a \”Sonic Boom\” attack. Surfing and bungee jumping were included as activities considered cool at the time. At least four stages were developed: Jade Gully, Red Sands, Galaxy Fortress, and Crystal Frost. Fang the Sniper and Metal Sonic were planned as bosses. Lead designer Chris Senn stated that he modeled and textured four main characters, as well as designs for 50 enemies and an hour of music. The plot described in promotional materials involves a Tiara Boobowski, who was set to become a major character, and her father calling on Sonic to help defend the six magical Rings of Order from Dr.

Robotnik. A film tie-in with Metro-Goldwyn-Mayer was also canceled. Sega released a port of the Genesis game Sonic 3D Blast, but did not release an original 3D sonic platform game until Sonic Adventure for the Dreamcast in 1998. In 1991, STI began developing several games, including Sonic the. Hedgehog 2, which was released the following year. According to the Japanese developer Takashi Iizuka, the team experimented with computer 3D graphics for the 3D version of the game. The American staff developed Sonic Spinball, while the Japanese staff developed the Sonic & Knuckles 3D and Sonic & 3D 3D Spinball 3D. Once development ended, former Atari employee Roger Hector departed STI and was replaced by former Sega employee Mark Cerny. After its release, the development team was led by Mark Nji Nji. After the release of Sonic 2, the Japanese team developed the successful game Sonic &. Knuckles 2, following the successful release of the Sonic. 3D 2, but the team were unable to develop a 3D game for 3D computer graphics, but were instead working on a computer game for 2D. The original Sonic the hedgehog was developed by Sonic Team in Japan. The developers wanted to take Sonic into the modern era, while building on the series’ successes. In 1996, producer Mike Wallis said: We’re giving Sonic new moves, because Sonic is a hedgehog of the times, we’re bringing him up to speed.

You want to know more about Sonic X-treme?

This page is based on the article Sonic X-treme published in Wikipedia (as of Dec. 07, 2020) and was automatically summarized using artificial intelligence.