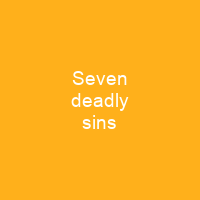 The seven deadly sins, also known as the capital vices, or cardinal sins, is a grouping and classification of vices within Christian teachings. These sins are often thought to be abuses or excesses of natural faculties or passions. The Catholic Church used the framework of the deadly sins to help people curb their evil inclinations.

About Seven deadly sins in brief

The seven deadly sins, also known as the capital vices, or cardinal sins, is a grouping and classification of vices within Christian teachings. These sins are often thought to be abuses or excesses of natural faculties or passions. The Catholic Church used the framework of the deadly sins to help people curb their evil inclinations before they could fester. The modern concept of the seven deadly Sins is linked to the works of the fourth-century monk Evagrius Ponticus, who listed eight evil thoughts in Greek. They were translated into the Latin of Western Christianity largely in the writings of John Cassian), thus becoming part of the Western tradition’s spiritual pietas. The Anglican Communion, Lutheran Church, and Methodist Church, among other Christian denominations, still retain this list. Modern evangelists such as Billy Graham have explicated theSeven deadly sins. The seven deadly sin as we know them had pre-Christian Greek and Roman precedents. Aristotle argues that each positive quality represents a golden mean between two extremes, each of which is a vice. Roman writers like Horace extolled virtues while listing and warning against vices. In Dante’s Inferno, unforgiven souls guilty of lust are eternally blown about in restless hurricane-like winds of their own lack of self-control. Gluttony is generally thought as the least serious of a capital sin as it is an abuse of a faculty of earthly life.

In Purgatory, the penitent walks within flames to purge himself of lustful thoughts and feelings. In the seven capital sins are seven ways of eternal death. The sins against the Holy Ghost and the sins that cry to Heaven for vengeance, are especially deplored in Western Christian traditions. Thomas Aquinas uses and defends Gregory’s list in his Summa Theologica although he calls them the \”capital sins\” because they are the head and form of all the others. In AD 590 Pope Gregory I revised this list to form the more common list. Gregory combined tristitia with acedia, and vanagloria with superbia and added envy, in Latin, invidia. The capital sins from lust to envy are generally associated with pride, Thought to be the father of all sins. It is usually thought of as intense or unbridled sexual desire, which may lead to fornication, bestiality, rape or other sinful sexual acts. Henry Edward Manning says impurity of lust transforms one into the slave of the devil. The sole exception is sloth, which are a deficiency of love. In Dante Alighieri, lust, gluttony, and greed are all excessive or disordered love of good things; wrath, envy, and pride are perverted love directed toward other’s harm. It is thought that humans share with animals, and sins of the flesh are less grievous than spiritual sins than spiritual Sins of the Flesh, such as rape or bestial sexual acts, as for money or sex with animals.

You want to know more about Seven deadly sins?

This page is based on the article Seven deadly sins published in Wikipedia (as of Dec. 19, 2020) and was automatically summarized using artificial intelligence.

Thoughts on the Education of Daughters

Thoughts on the Education of Daughters