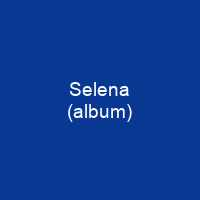 Selena is the self-titled debut studio album by American Tejano singer Selena. It was released on October 17, 1989, by EMI Latin. Selena peaked at number seven on the US Billboard Regional Mexican Albums. The album spawned three singles,  “Mentiras” and a Spanish-language version of a Japanese song called “Sukiyaki”

About Selena (album) in brief

Selena is the self-titled debut studio album by American Tejano singer Selena. It was released on October 17, 1989, by EMI Latin. Its music incorporates a range of contemporary genres with a mix of cumbia and regional styles of Mexican music. Selena peaked at number seven on the US Billboard Regional Mexican Albums, Selena’s first entry in a national music chart. The recording led Selena to win Female Vocalist of the Year and Female Entertainer of the year at the 1990 TeJano Music Awards. Songs from the album, \”Contigo Quiero Estar\” and \”Amame, Quiereme\” were nominated for Song of the Day and Vocal Duo of The Year respectively. The album spawned three singles,  “Mentiras” and a Spanish-language version of a Japanese song called “Sukiyaki” Selena increased the singer’s popularity, she became a sex icon after the album’s release. The group recorded an album with Freddie Records in 1984, though it was never released. After starting a band with his children, Abraham Quintanilla, Jr. became the group’s manager and began promoting it. Abraham provided two demos to Charlie Grever, father of Bob Grever owner of Cara Records, who signed then-thirteen-year-oldSelena to the recording label. Manny Guerra, who separated from Cara records, started his own record label. He dissolved the agreement between CarA Records and Selena when it was brought to his attention.

Selena recorded five LP records for Manny’s GP Productions by 1988, without a contract. Abraham expressed in an interview how he forgot to sign it, and noticed how Guerra stopped asking him about the contract after Selena became more popular. Abraham chose E MI Latin’s offer because of the potential for a crossover, and he wanted his children to be the first musicians to sign with the company. Before Selena began recording her debut album, Behar and Stephen Finfer requested a crossover album for her. The goal of the album was to be introductory into the international Latin music market, with future sights into an English-language crossover. Behar believed he had discovered \”the next Gloria Estefan\”, which his superior called him illogical since he had only been in Texas for a week. The company believed Selena had potential in Mexico and South American markets they signed the singer in 1989 when they opened an agreement that opened up an agreement when they went into an agreement with an American record company. The singer recorded three English- language songs for the heads of EMI’s pop division, but they denied the project after Charles Koppelman believed that a Mexican woman could have a potential for crossover.

You want to know more about Selena (album)?

This page is based on the article Selena (album) published in Wikipedia (as of Dec. 06, 2020) and was automatically summarized using artificial intelligence.