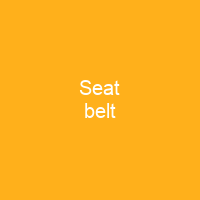 Seat belts were invented by English engineer George Cayley to use on his glider, in the mid-19th century. By 1950, almost every race-car driver used safety seat belts. The first modern three-point seat belt used in most consumer vehicles today was patented in 1955 by the Americans Roger W. Griswold and Hugh DeHaven.

About Seat belt in brief

Seat belts were invented by English engineer George Cayley to use on his glider, in the mid-19th century. By 1950, almost every race-car driver used safety seat belts. The first modern three-point seat belt used in most consumer vehicles today was patented in 1955 U.S. Patent 2,710,649 by the Americans Roger W. Griswold and Hugh DeHaven. The world’s first seat belt law was put in place in 1970, making the wearing of a seat belt compulsory for drivers and front-seat passengers in Australia. Unbelted occupants sustained fatal injuries throughout the whole speed scale, whereas the belted occupants were fatally injured at speeds below 60 mph. No belted occupant was fatally injured if the passenger compartment remained intact, according to a study of 28,000 accidents in Sweden in the late 1950s. In the early 1950s, Dr. C. Hunter Shelden made a major contribution to the automotive industry with his idea of retractable seat belts, which he proposed in late 1955. In 1966, Congress passed the National Traffic and Motor Vehicle Safety Act requiring all automobiles to comply with certain safety standards. American car manufacturers Nash and Ford offered seat belts as options, while Swedish Saab first introduced seat belt as standard in 1958. The range of fatality reduction for front seat passengers was broad, from 20% to 55%, as was the range of major injury, from 25% to 60%. More recently, the Centers for Disease Control and Prevention has summarized these data by stating \”seat belts reduce serious crash-related injuries and deaths by about half.

\” Most seatbelt malfunctions are a result of there being too much slack in the seatbelt at the time of the accident. The three- point seatbelt was developed to its modern form by Swedish inventor Nils Bohlin for Volvo—who introduced it in 1959 as standard equipment. This was a continuation of an earlier patent application that Mr. Sheren had filed on September 22, 1952. In addition to designing an effective belt, Bohlin demonstrated its effectiveness in a study in Sweden, where none of the passengers injured at accident were fatally hurt at speed below 60mph. This legislation was enacted after trialing seatbelts, designed by Desmond Hemphill, lowering the incidence of injury and death in the front seats of police vehicles in the state of Victoria, Australia, lowering incidence of death and injury in front passengers in front of police officers in 1970. The seat belt was granted U. S. Patent 3,625,625 for the device in 1963. In 1984, a study in the United States in 1984 compared a variety of seat belt types alone and in combination with air bags, and found that seat belts were more effective than air bags in reducing injuries and fatalities in front and rear seats. The study was conducted by the University of California, Los Angeles. It found that a seatbelt applies an opposing force to the driver and passengers to prevent them from falling out or making contact with the interior of the car.

You want to know more about Seat belt?

This page is based on the article Seat belt published in Wikipedia (as of Jan. 03, 2021) and was automatically summarized using artificial intelligence.

Death of Diana, Princess of Wales

Death of Diana, Princess of Wales