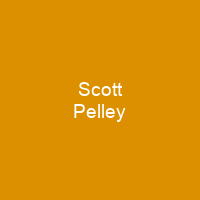 Scott Cameron Pelley is an American journalist and author. He has been a correspondent and anchor for CBS News for more than 31 years. Pelley served as anchor and managing editor of the CBS Evening News from 2011 to 2017. He is the author of the 2019 book, Truth Worth Telling.

About Scott Pelley in brief

Scott Cameron Pelley is an American journalist and author. He has been a correspondent and anchor for CBS News for more than 31 years. Pelley served as anchor and managing editor of the CBS Evening News from 2011 to 2017. He is the author of the 2019 book, Truth Worth Telling, and a correspondent for the CBS News magazine 60 Minutes. He served as CBS News’s chief White House correspondent from 1997 to 1999. He was assigned to cover the 1992 presidential campaigns of Ross Perot and Bill Clinton, and also reported on such major events as the 1993 World Trade Center bombing, the Waco Siege, and the Oklahoma City bombing. In September 2015, Pelley met Pope Francis at the Vatican ahead of the pontiff’s visit to the United States, and later led CBS News’ coverage of the visit. Starting with the Persian crisis of 1990, he has reported extensively from many war zones, including Iraq, Afghanistan, Sudan and the Arctic. In 2003, he and a 60 Minutes team were the first to break the news of the genocide in Darfur. In 2007, he filed reports on the insurgency in the Darfur region of Sudan. In 2009, he conducted the only interview with one of the Navy SEALs who helped to kill Osama bin Laden and a news-breaking interview with the chief accuser in Major League Baseball’s doping case against Alex Rodriguez of the New York Yankees. In 2014, he landed the first major television interview with FBI Director James Comey in 2014; and he conducted an interview of the nurses who treated the first Ebola patient in the U.S.

Pelley’s work has also featured reporting on the economic collapse of 2008-2009, on the wars in Afghanistan and Iraq and reporting on climate change from Antarctica and the polar regions. He reported from Iraq on the front lines in the battle against ISIS; he has also reported from Afghanistan and the war in Iraq. He also has reported from the Arctic and Antarctica and has covered climate change in the Arctic, Antarctica, the Antarctic and the Northern Hemisphere. In 2011, he was awarded an Emmy Award for his work on 60 Minutes II shortly after its inception. In 2013, he won a Peabody Award for a special report on the World Series of Poker, which he co-hosted and co-anchored with John Avlon. In 2012, he received a GMA award for his coverage of World Series coverage, which included a special on the Iraq War and the fall of Saddam Hussein. In 2010, he also won an Emmy for his reporting on Iraq and the invasion of Kuwait. In 2001, he accompanied the XVIII Airborne Corps on its invasion of Iraq and helped force the liberation of Kuwait, and he reported on the invasion and liberation of Iraq in 2001. In 2004, he began filing reports for 60 Minutes on Sunday. He moved to the Sunday edition of the broadcast in 2004. In 2008, he broke the news that Monica Lewinsky had become a cooperating witness in the investigation conducted by the Office of Independent Counsel.

You want to know more about Scott Pelley?

This page is based on the article Scott Pelley published in Wikipedia (as of Nov. 17, 2020) and was automatically summarized using artificial intelligence.