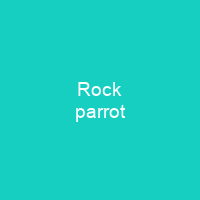 The rock parrot is a species of grass parrot native to Australia. Described by John Gould in 1841, it is a small parrot 22 to 24 cm long and weighing 50–60 g. Its head is olive with light blue forecheeks and lores, and a dark blue frontal band line across the crown with lighter blue above and below.

About Rock parrot in brief

The rock parrot is a species of grass parrot native to Australia. Described by John Gould in 1841, it is a small parrot 22 to 24 cm long and weighing 50–60 g. Its head is olive with light blue forecheeks and lores, and a dark blue frontal band line across the crown with lighter blue above and below. The sexes are similar in appearance, although the female tends to have a duller frontal band and less blue on the face. Rocky islands and coastal dune areas are the preferred habitats for this species, which is found from Lake Alexandrina in southeastern South Australia westwards across coastal South and Western Australia to Shark Bay. Unlike other grass parrots, it nests in burrows or rocky crevices mostly on offshore islands such as Rottnest Island. Seeds of grasses and succulent plants form the bulk of its diet. The species has suffered in the face of feral mammals, but it is considered to be a least-concern species by the International Union for Conservation of Nature. Two subspecies are recognised: subspecies petrophila from Western Australia and subspecies zietzi from South Australia, the latter described by Gregory Mathews in 1912 from the Sir Joseph Banks Group in Spencer Gulf, after the Assistant Director of the South Australian Museum Amandus Heinrich Christian Zietz.

The primary flight feathers are black with dark blue edges, while the inner wing feathers are olive and the tail is turquoise edged with yellow on its upper surface. It is one of four species classified in the subgenus Neonanodes and is most closely related to the orange-bellied parrot, the other two species being the blue-winged and elegant parrot. A burrow-nester, the rockParrot has evolved from a lineage of tree-nesting ancestors. In the female, the dark blue band is slightly duller and there is less blue in the adult, the wings are predominantly olive, and there are two-toned blue leading edges when folded. These are not normally visible, which are normally not visible on the mandibles. The bill is black with black highlights on both mandibles, which normally are not visible. The bases of the feathers on the head and grey, apart from those on the nape, are pale grey, with pale blue highlights on the cereibles, and pale black on the skull. The eyes are pale black with pale black highlights, and the nose is black and grey with pale grey highlights. It has a 33–34 cm wingspan, with a 33 cm wingspan and a wingspan of 22-24 cm. It nests in almost inaccessible locations on cliff faces on offshore Islands, including RottNest, near the western port of Fremantle.

You want to know more about Rock parrot?

This page is based on the article Rock parrot published in Wikipedia (as of Oct. 30, 2020) and was automatically summarized using artificial intelligence.