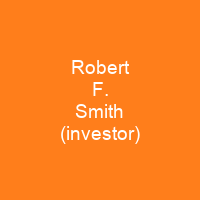 Robert Frederick Smith is an American businessman, philanthropist, chemical engineer, and investor. He is the founder, chairman, and CEO of investment firm Vista Equity Partners. Smith is included in Time magazine’s 100 Most Influential People of 2020.

Robert Frederick Smith is an American businessman, philanthropist, chemical engineer, and investor. He is the founder, chairman, and CEO of investment firm Vista Equity Partners. In 2019, Smith pledged to eliminate USD 34 million of student loan debt for the Morehouse College graduating class that year. Smith is included in Time magazine’s 100 Most Influential People of 2020. In 2018, Smith was the largest individual donor at the City of Hope Gala, which raises funds for prostate cancer and breast cancer research. He has also served as the chairman of Robert F. Kennedy Human Rights, on the board of overseers of Columbia Business School, as a member of the Cornell Engineering College Council, and as a Trustee of the Boys & Girls Clubs of San Francisco. In 2015, Smith sponsored the college education of all returned Boko Haram girls.

He was named as Private Equity International’s Game Changer of the Year for his work with Vista. In 2016, Smith gave a USD 2.7 million grant to the Louis Armstrong Museum, which digitized Armstrong’s collection to make it available to the public. In 2017, The Chronicle of Philanthropy announced that Smith had joined as its first African-American-American signatory to the Giving Pledge. That year, he was awarded an honorary doctorate from the University of Denver. Smith was later recognized by the college as a distinguished alumnus by the Cornell University School of Chemical and Biomolecular Engineering. In 2014, Smith became the founding director and president of the Fund II Foundation, which has invested in organizations such as Cornell, the National Park Foundation, and Susan G. Komen.

You want to know more about Robert F. Smith (investor)?

This page is based on the article Robert F. Smith (investor) published in Wikipedia (as of Nov. 29, 2020) and was automatically summarized using artificial intelligence.