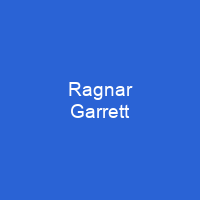 Lieutenant General Sir Alwyn Ragnar Garrett, KBE, CB was a senior commander in the Australian Army. He served as Chief of the General Staff from 1958 to 1960. He was also honorary colonel of the Royal Australian Regiment. He died at Mornington, Victoria, in 1977, aged 80.

About Ragnar Garrett in brief

Lieutenant General Sir Alwyn Ragnar Garrett, KBE, CB was a senior commander in the Australian Army. He served as Chief of the General Staff from 1958 to 1960. Born in Western Australia, Garrett graduated from the Royal Military College, Duntroon, in 1921. He was adjutant and quartermaster in several regiments of the Australian Light Horse before undertaking staff training in England. Garrett joined the Second Australian Imperial Force soon afterwards, and commanded the 231st Battalion in England before seeing action with Australian brigades in Greece and Crete in 1941. After the war, Garrett served two terms as commandant of the Staff College, Queenscliff, in 1946–1947 and 1949–1951. After retiring from the military in June 1960, Garrett became honorary colonel of the Royal Australian Regiment, and was principal of theAustralian Administrative Staff College until 1964. He died at Mornington, Victoria, in 1977, aged 80. He is buried at Mount Gambier, South Australia. He married Shirley Lorraine Hunter, a nurse, on 9 September at St Peter’s Anglican Church in the Adelaide suburb of Glenelg; the couple had a son and a daughter. Garrett was appointed a Commander of the Order of the British Empire for his staff work.

He also served as a Companion of the order in 1957 and was knighted in 1959. He had a daughter, Shirley Lorraine Garrett, who was married to General Sir Tom Bridges, the former Governor of South Australia, and a son, Randal Raggett Garrett, who served in the Second World War. Garrett died in Mornington in 1977 and is survived by his wife, Shirley, and two children,  Randy and Laurie. He leaves behind a wife and two sons, all of whom are still living in Australia. The couple had no children of their own, but two step-grandchildren. Garrett is buried in Northam, West Australia, with his wife and three step-great-granddaughters, Julia, Sylvia, and Julian, who died in 2008. He has a daughter and two grandchildren, Tara and Julie Garrett, both of whom were born in South Australia and now live in Victoria. Garrett served as an officer in the Light Horse and the Australian National Guard. He joined the British Army in 1923 and was posted to the 2nd Dragoon Guards in Bangalore, India. In November 1923, Garrett was seconded to the. British Army, and spent the next twelve months attached to the 1st. Light Horse Regiment in India.

You want to know more about Ragnar Garrett?

This page is based on the article Ragnar Garrett published in Wikipedia (as of Nov. 23, 2020) and was automatically summarized using artificial intelligence.