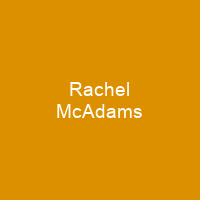 Rachel Anne McAdams is a Canadian actress. She rose to fame in 2004 with the comedy Mean Girls. In 2010, McAdams appeared in the star vehicle comedy film Morning Glory. In 2015, she starred in the second season of the HBO anthology crime drama series True Detective, and portrayed the journalist Sacha Pfeiffer in the drama Spotlight.

About Rachel McAdams in brief

Rachel Anne McAdams is a Canadian actress. She rose to fame in 2004 with the comedy Mean Girls and the romantic drama The Notebook. In 2010, McAdams appeared in the star vehicle comedy film Morning Glory. In 2015, she starred in the second season of the HBO anthology crime drama series True Detective, and portrayed the journalist Sacha Pfeiffer in the drama Spotlight. For the latter, she was nominated for the Academy Award for Best Supporting Actress. Her maternal fifth great-grandfather, James Gray, was a Loyalist Ranger during the American Revolution and fled to Canada after the Battles of Saratoga. McAdams was inspired by two of her teachers, who taught her English and drama, respectively, in the 11th and 12th grades. She enrolled in York University’s four-year theatre program and graduated with a Bachelor of Fine Arts honours degree in 2001. She has said that skating prepared her for physical acting, because it trained her to be ‘in tune’ with her body. She worked at a McDonald’s restaurant during the summer holidays for three years. Mc Adams is of Scots, English, Irish, and Welsh descent. She is the eldest of three children; she has a younger sister, Kayleen McAdams, a celebrity make-up artist, and a younger brother, Daniel \”Dan\” McAdams, a personal trainer. She made her television debut in 2001 as Beth Swanson in the pilot Shotgun Love Dolls. She also made her Canadian film debut that year in the comedy My Name Is Tanino.

In 2002, she made her Hollywood film debut in The Hot Chick, which she has described as a ‘huge milestone’ in her career. She later earned a Genie Award nomination in Canada for her role in Perfect Pie, which was filmed when she was 22 years old. In 2005, she starring in the romantic comedy Wedding Crashers, the psychological thriller Red Eye, and the comedy-drama The Family Stone. She was hailed by the media as Hollywood’s new ‘it girl’ and received a BAFTA Award nomination for Best Rising Star. In the spring of 2009, she appeared in the political thriller State of Play, the romance The Time Traveler’s Wife,. and the mystery film Sherlock Holmes. She went on to star in the films Midnight in Paris, The Vow, and About Time. In the summer of 2013, she played the lead role in the TV series The X-Files: New Beginnings, which marked her first time on an airplane. She played a catty high school student who swaps bodies with a student from a nearby high school. In 2014, she co-starred with Rob Schneider and Anna Faris in the film The Far Side. She appeared in a number of other films, including the comedy Game Night and Eurovision Song Contest: The Story of Fire Saga. She won a Gemini Award for her performance in The Italian-Canadian co-production My Name is Tanino, for which she was co-produced in Sicily.

You want to know more about Rachel McAdams?

This page is based on the article Rachel McAdams published in Wikipedia (as of Dec. 26, 2020) and was automatically summarized using artificial intelligence.