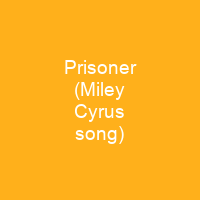 The song was released on November 19, 2020 through RCA Records. It is the second single from Cyrus’ seventh studio album Plastic Hearts. The song is a dance, dark-pop, disco-punk, Disco-rock, glam rock, and nu-disco track.

The song was released on November 19, 2020 through RCA Records. It is the second single from Cyrus’ seventh studio album Plastic Hearts. The song was composed using 44 in the key of E♭ minor, with a moderately-fast tempo of 126–132 beats per minute. The lyrics relate to angst inpired by isolation feelings and were described by critics as a \”heartache anthem\” and a \”glam declaration of independence\”. The song’s chorus interpolates the melody from Olivia Newton-John’s 1981 hit \”Physical\”. It is a dance, dark-pop, disco-punk, Disco-rock, glam rock, and nu-disco track with a length of two minutes and forty-nine seconds. Cyrus described the song as a perfect blend of her and Lipa’s styles in an interview to Zane Lowe for Apple Music. She said they had worked on other songs together in the past and praised Lipa: For her and I, there’s just no competition. That changes just everything. There’s a true partnership.

Then I also liked that it wasn’t the first song we’d cut together. We actually cut other songs. She wanted to keep going until it was right, until we found the one that honors our individuality. We just waited until we felt like, ‘Now this is Dua-Miley song…’There’s even something to me, like how I talk about like fashion being a way to flip yourself inside out. The colors that I see, when I listen to a song, I see colors. Some parallels can be drawn between the lyrics to \”Prisoner\” and Cyrus’ old songs. The verse: \”I try to replace it with the city lights\” is an allusion to Cyrus’ 2019 song \”Slide Away\”, about her split from then-husband Liam Hemsworth, where she sings: ‘So won’t you slide away?Back to the ocean, I’ll go back to the pre-chorus’ The lyrics to the song contain a contrast to the lyrics of her 2010 song: ‘Locked up, I can’t get you off my mind’

You want to know more about Prisoner (Miley Cyrus song)?

This page is based on the article Prisoner (Miley Cyrus song) published in Wikipedia (as of Dec. 09, 2020) and was automatically summarized using artificial intelligence.