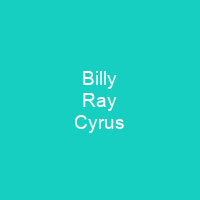 Billy Ray Cyrus is an American singer-songwriter and actor. He has released 16 studio albums and 53 singles since 1992. His most successful album to date is his debut Some Gave All, which has been certified 9× Multi-Platinum in the United States. From 2001 to 2004, Cyrus starred in the television show Doc. He co-starred in the Disney Channel series Hannah Montana with his daughter Miley Cyrus.

About Billy Ray Cyrus in brief

Billy Ray Cyrus is an American singer-songwriter and actor. He has released 16 studio albums and 53 singles since 1992. He is known for his number one single \”Achy Breaky Heart\”, which became the first single ever to achieve triple platinum status in Australia. His most successful album to date is his debut Some Gave All, which has been certified 9× Multi-Platinum in the United States. From 2001 to 2004, Cyrus starred in the television show Doc. From 2006 to 2011, he co-starred in the Disney Channel series Hannah Montana with his daughter Miley Cyrus. In 2019, Cyrus earned his first number-one single on the US Billboard Hot 100 as a featured artist on a remix of Lil Nas X’s song \”Old Town Road\”, which has spent a record-breaking nineteen consecutive weeks at the top spot. Cyrus started singing at the age of four. He attended Georgetown College on a baseball scholarship before changing to music. He dropped out of Georgetown during his junior year, realized he wanted to become a musician after attending a Neil Diamond concert, and set a 10-month goal to start a career. In the 1980s, he played in a band called Sly Dog, before signing a record contract with Mercury Nashville Records. While trying to get a recording contract in Los Angeles, Cyrus suffered many hardships including living in his neighbor’s car. In 1990, he was signed to PolyGramMercury. That same year, he opened for Reba McEntire.

Cyrus began to record and write music for his debut album, released in 1992. The album featured the title cut, the title track, the most successful single released from 1992 to 1993, including “Achy breaky heart” It reached No. 1 on the Hot Country Songs chart and was also a hit on the Billboard 100, where it reached No 4. Although the song was the only craze for country music, there was the explosion of the line dance into the mainstream, becoming a global craze. It also became an international success, reaching number 1 in Australia and number 3 on the UK Singles Chart. In his career, he has released 36 charted singles, of which 17 charted in the top 40. His album has also sold more than 20 million copies worldwide and is the best-selling debut album of all time for a solo male artist. It is also the top-ranking debut album by a male country artist. Cyrus won his first two Grammy Awards, in the categories Best Pop DuoGroup Performance and Best Music Video. He also has a daughter, Miley, who was born on August 25, 1961 in Flatwoods, Kentucky, to Ron Cyrus, a politician and former steelworker, and his wife, the former Ruth Ann Casto. The couple have a son, 5-year-old son, Billy Ray Cyrus Jr., and daughter, Cyrus Cyrus III, born on September 11, 2012. Cyrus is married to former U.S. Vice President Joe Biden.

You want to know more about Billy Ray Cyrus?

This page is based on the article Billy Ray Cyrus published in Wikipedia (as of Nov. 30, 2020) and was automatically summarized using artificial intelligence.