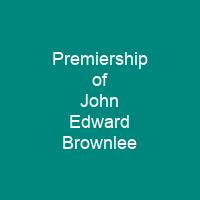 John Edward Brownlee was Premier of Alberta, Canada, from 1925 to 1934. He was leader of the United Farmers of Alberta caucus in the Legislative Assembly of Alberta. In 1934, he was embroiled in a sex scandal when a family friend sued him for seduction. Though Brownlee denied the events she alleged, when the jury found in her favour he announced his resignation as premier.

About Premiership of John Edward Brownlee in brief

John Edward Brownlee was Premier of Alberta, Canada, from 1925 to 1934. He was leader of the United Farmers of Alberta caucus in the Legislative Assembly of Alberta. Brownlee became premier on November 23, 1925, when, at the request of the UFA caucus, he took over from the indecisive Herbert Greenfield. After a number of early successes, his popularity and his government’s suffered from the hardships of the Great Depression. In 1934, he was embroiled in a sex scandal when a family friend sued him for seduction. Though Brownlee denied the events she alleged, when the jury found in her favour he announced his resignation as premier. In deference to public outrage over the charges, John Brownlee resigned as premier July 10, 1934, and was succeeded by Richard Gavin Reid. His government’s fortunes entered a decline following the 1930 election. Agricultural prices collapsed, throwing many of Alberta’s farmers into abject poverty. Urban unemployment shot up, and the government had no choice but to return to deficit spending. Political radicalism increased, as communism, the new Co-operative Commonwealth Federation, and William Aberhart’s social credit movement gained new adherents. In 1933, Prime Minister R. B. Bennett named Brownlee to the Royal Commission on Banking and Currency as a representative of western interests and unorthodox viewpoints. He concurred with the commission’s ultimate recommendation for the creation of a central bank, but he also made a series of recommendations of his own, including that the central bank be controlled entirely by the government. In this capacity, Brownlee travelled the country questioning witnesses, especially bankers and farmers.

He also introduced a controversial sexual sterilization program to prevent the mentally disabled from procreating. In 1928 he divested the government of the money-losing railways it had acquired after the syndicates that founded them went out of business, by selling them to Canadian Pacific and Canadian National. In 1929 he signed an agreement with the federal government that transferred control of Alberta’s natural resources to its provincial government, which had been a priority of his three immediate predecessors as Premier. In 1932 he was named as the first chairman of the Canadian Council of Learned Societies, a body that had been established to promote the study of the history of the English language and culture. In 1935 he became the first member of the Council to serve as its president. In 1936 he was made the first honorary chairman, a position he held until his death in 1958. In the 1930s he was the only member of Parliament to serve in both the Alberta House of Assembly and the House of Commons of Canada. He served in this capacity from 1921 to 1925, and he was a member of Calgary West from 1921 until 1925. In 1921 he was elected to the Calgary West Legislature as a Calgary West Member of Parliament. In 1925 he was appointed as Attorney-General by the Lieutenant Governor of Alberta William Egbert. In 1926 he was asked to form a government by the lieutenant governor of Alberta at the behest of much of theUFA caucus. The UFA was the official opposition to the Liberal government.

You want to know more about Premiership of John Edward Brownlee?

This page is based on the article Premiership of John Edward Brownlee published in Wikipedia (as of Nov. 03, 2020) and was automatically summarized using artificial intelligence.