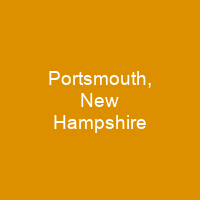 Portsmouth is a city in Rockingham County, New Hampshire, United States. As of the 2010 census it had a population of 21,233, and in 2019 the estimated population was 21,927. It is a historic seaport and popular summer tourist destination on the Piscataqua River.

About Portsmouth, New Hampshire in brief

Portsmouth is a city in Rockingham County, New Hampshire, United States. As of the 2010 census it had a population of 21,233, and in 2019 the estimated population was 21,927. It is a historic seaport and popular summer tourist destination on the Piscataqua River bordering the state of Maine. Portsmouth was formerly the home of the Strategic Air Command’s Pease Air Force Base, since converted to Portsmouth International Airport at Pease. American Indians of the Abenaki and other Algonquian languages-speaking nations, and their predecessors, inhabited the territory of coastal New Hampshire for thousands of years before European contact. The west bank of the harbor was settled by English colonists in 1630 and named Strawbery Banke, after the many wild strawberries growing there. In 1774, in the lead-up to the Revolution, Paul Revere rode to Portsmouth warning that the British were coming, with warships to subdue the port. In 1849, Portsmouth was incorporated as a city. It has significant examples of Colonial, Georgian, and Federal style houses, some of which are now museums. Portsmouth’s heart has stately brick Federalist stores and townhouses, built all-of-a-piece after devastating early 19th-century fires.

The city was also noted for the production of boldly wood-veneered Federalist furniture, particularly by the master cabinet maker Langley Boardman. In the 20th century, the city founded a Historic District Commission, which has worked to protect of the city’s irreplaceable architectural legacy. In 2008, the National Trust for Historic Preservation named Portsmouth one of the “Dozen Distinctive Destinations of the Year” The city celebrates the revitalization of its downtown with Market Day, a celebration dating back to 1977, which was built on nearby Kittery Island, Maine, that was built in 1781–82. During that time, the naval hero John Paul Jones lived in Portsmouth while he supervised the construction of his ship, the Ranger, which he built on Badger Island, which is now a tourist attraction. The port of Portsmouth declined, but the city survived Victorian-era doldrums, a time described in the works of Thomas Bailey Aldrich, particularly in his 1869 novel The Story of a Bad Boy. The Industrial Revolution spurred economic growth in New Hampshire mill towns such as Dover, Keene, Laconia, Manchester, Nashua and Rochester.

You want to know more about Portsmouth, New Hampshire?

This page is based on the article Portsmouth, New Hampshire published in Wikipedia (as of Dec. 29, 2020) and was automatically summarized using artificial intelligence.