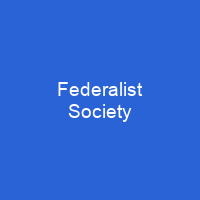 The Federalist Society for Law and Public Policy Studies is an organization of conservatives and libertarians that advocates for a textualist and originalist interpretation of the United States Constitution. Founded in 1982, it is one of the nation’s most influential legal organizations. It currently has chapters at more than 200 United States law schools and has more than 70,000 practicing attorneys in ninety cities.

About Federalist Society in brief

The Federalist Society for Law and Public Policy Studies is an organization of conservatives and libertarians that advocates for a textualist and originalist interpretation of the United States Constitution. Founded in 1982, it is one of the nation’s most influential legal organizations. The society is a membership organization that features a student division, a lawyers division, and a faculty division. It currently has chapters at more than 200 United States law schools and has more than 70,000 practicing attorneys in ninety cities. It has played a key role in suggesting judicial nominees to President Donald Trump; it vetted President Trump’s list of potential U.S. Supreme Court nominees and, as of March 2020, 43 out of 51 of President Trump’s appellate court nominees were current or former members of the society. Its logo is a silhouette of former President James Madison, who co-wrote The Federalist Papers, and U. S. Securities and Exchange Commission considered society members to be heirs of James Madison’s legacy to its chapter in Dallas, Texas. The Society’s name is said to have been based on the eighteenth-century Federalist Party in opposition to Thomas Jefferson and the Democratic-Republican Party in Opposition to James Madison. The group’s views are more closely associated with the general meaning of Federalism and the content of the Federalism’s initial meaning than the later meaning of the federalist Party’s policies. It states that it \”is founded on the principles that the state exists to preserve freedom, that the separation of governmental powers is central to our constitution, and that it is emphatically the province and duty of the judiciary to say what the law is, not what it should be.’’ The society looks to Federalist Paper Number 78 for an articulation of the virtue of judicial restraint, as written by Alexander Hamilton: “The courts must declare the sense of the law; and if they should be disposed to exercise WILL instead of JUDGMENT, the consequence would equally be the substitution of their pleasure to that of the legislative body…

The courts must declaring the senseof the law, not the other way around,” says Alexander Hamilton, in his Federalist paper Number 78, “On the pretense of a repugnancy, may substitute their own pleasure to the constitutional intentions of the legislature.” The society states that “the courts, on the pretence of a. repugNancy,may substitute their. own pleasure for theconstitutional intentions of. the legislature, and the legal academy. ““The society is headquartered in Washington, D. C., and has a chapter in every major city in the country, including New York, Los Angeles, San Francisco, Chicago, and San Diego. It was founded as a student organization that challenged what its founding members perceived as the orthodox American liberal ideology found in most law schools. In 2018, Politico Magazine wrote that it was perhaps the most effective student conference ever—a blueprint, in retrospect, for how to marry youthful enthusiasm with intellectual oomph to achieve far-reaching results.

You want to know more about Federalist Society?

This page is based on the article Federalist Society published in Wikipedia (as of Jan. 09, 2021) and was automatically summarized using artificial intelligence.