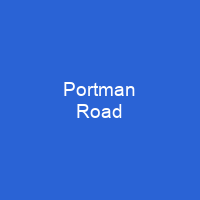 Portman Road is a football stadium in Ipswich, Suffolk, England. It has been the home ground of Ipswich Town F. C. since 1884. The stadium has a capacity of 30,311, making it the largest-capacity football ground in East Anglia.

About Portman Road in brief

Portman Road is a football stadium in Ipswich, Suffolk, England. It has been the home ground of Ipswich Town F. C. since 1884. The stadium has a capacity of 30,311, making it the largest-capacity football ground in East Anglia. It is home to England youth international matches, and one senior England friendly international match, against Croatia in 2003. Ipswich played their early matches at Broomhill Park, but in 1884, the club moved to Portman Road and have played there ever since. The ground was also used as a cricket pitch during the summer by the East Suffolk Cricket Club who had played there since 1855. In 1914, the ground was commandeered by the British Army for use as a training camp for the duration of the First World War. In 1957, the association raised £30,500 towards the building of a new West Stand, increasing ground capacity to around 31,000. Floodlights were installed two years later; the result of £15,000 raised by the association. The floodlights were switched on by club president Lady Blanche Cobbold for the first floodlit match at the ground, a friendly against Arsenal, in February 1960. In 1968 the club agreed a new 99-year lease on the ground with owners Ipswich Borough Council, while the propped cantilever was built along the east side of the ground in the same year. The first permanent stand, a wooden structure known affectionately as the ‘Chicken Run’, was built on the Portman road side of the ground in 1906.

For a short period during the 1920s, Portman Road was host to a number of whippet races in an attempt to increase revenue, and in 1928 a small stand was built. In 1971, advertising appeared around the perimeter of the ground, providing 3,500 additional seats and increasing the existing capacity to approximately 37,000, while in the following year, construction of the “Churchmans’ Stand’ took place. In the early 2000s, the stadium underwent significant redevelopments, which increased the capacity from 22,600 to a current figure of 30,311. Its four stands have since been converted to all-seater, following the recommendations of the Taylor Report. The roof of the North Stand and North Stand were constructed in 1965 and new turnstiles were introduced two years later, including a separate entrance for juveniles at the Churchmans end of the pitch. Meanwhile, grounding enhancements to an increase in capacity to 31,500 by 1963 continued, with the first roof being installed in the north stand in 1965. It was another six years before the BBC televised a match, Match of the Day visiting PortMan Road in 1968 to witness Ipswich’s league fixture against Birmingham City in 1968.

You want to know more about Portman Road?

This page is based on the article Portman Road published in Wikipedia (as of Dec. 06, 2020) and was automatically summarized using artificial intelligence.